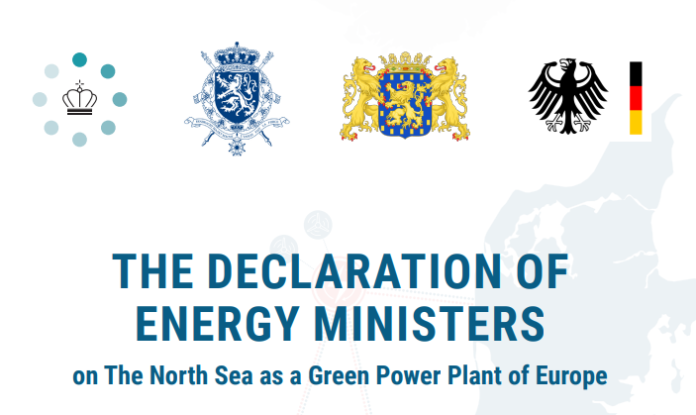 The heads of state from Germany, Belgium, the Netherlands and Denmark have signed a joint declaration to make the North Sea a green powerhouse for Europe. Together, the four countries will increase at least tenfold the capacity of offshore wind by 2050.

At the North Sea summit in Esbjerg, Danish Prime Minister Mette Frederiksen signed a declaration with German Chancellor Olaf Scholz, Dutch Prime Minister Mark Rutte and Belgian Prime Minister Alexander De Croo. The countries will be able to supply 65 GW of offshore wind by 2030 and increase capacity to at least 150 GW by 2050. It can supply up to 230 million European households with green power.

“This summit is nothing short of historic,” says Minister of Climate and Energy Dan Jørgensen. “We have agreed on an ambitious declaration which will not only supply the whole of Europe with green electricity, but which in the long run can also contribute to the production of green fuels for ships, aircraft and lorries. All four countries see the enormous potential that the strong winds of the North Sea offer us, and we are ready to reap it. It is joint decisions like these that make a decisive difference when we have to tackle both the climate and energy crisis, where it is imperative to become independent of black energy from Russia.”

Denmark will establish the world’s first multi-phased and largest energy island in the North Sea with an initial capacity of 3 GW offshore wind by 2033 and connections to Belgium and Denmark. They will work on preparing the ground for further connections to Germany, and the Netherlands has priority.

Denmark will reach at least 10 GW total offshore wind capacity by 2030 with a goal towards up to 35 GW in the North Sea by 2050 and potentially more depending on European demand for green power. Denmark and the Netherlands will explore how to connect the energy island in the Danish EEZ to a Dutch energy hub, including perspectives for offshore green hydrogen production.

“It is a historic day for Europe and Belgium,” states Belgian Energy Minister Tinne Van der Straaten. “Together with Denmark, Germany and the Netherlands, Belgium is leading the way in collaborating to make the North Sea a green power plant in Europe. Energy is used today as a weapon, and our families and businesses are the victims. By turbocharging green energy, we can more quickly replace gas and oil, especially from Russia, with wind and green hydrogen. That way, we increase our energy dependence and decrease our bills. Belgium is accelerating energy conversion by quadrupling offshore wind capacity in the Belgian part of the North Sea, creating a hybrid energy island and connecting us to our neighboring countries.”

Belgium will establish the world’s first offshore energy island, a hybrid project combining offshore wind generation and cross-border interconnection. Belgium and Denmark will work closely together on hybrid renewable energy projects, including the connection between both the Danish Energy Island and the Belgian energy hub. Belgium will also establish 5.8 GW offshore wind capacity by 2030 and 8 GW by 2040.

“It is an exciting collaboration between the four countries that will help us – and Europe – to increase green energy production and reduce dependence on fossil fuels,” comments Netherlands Minister of Energy and Climate Rob Jetten. “All four countries are in a unique position to utilize the natural resources the North Sea offers: Abundant wind power and a shallow seabed. By connecting the energy islands, sharing resources and knowledge, we will have the opportunity to fulfill our common goals, and I look forward to further developing our common plans.”

The Netherlands will establish about 21 GW offshore wind capacity around 2030.

“This is an important day to reduce our dependence on gas imports and achieve climate neutrality,” says Robert Habeck, Germany’s Minister for Economic Affairs and Climate. “By developing collaborative projects with our North Sea partners, offshore wind can be implemented faster and more efficiently and new potentials for green hydrogen can be exploited. To realize the project quickly, we also need for the right regulatory framework conditions.”

Germany and Denmark already developed a first of its kind hybrid offshore wind cooperation project and intend to cooperate on the Bornholm Energy Island in the Baltic Sea including hybrid interconnections and will also engage in hybrid renewable energy projects in the North Sea. Germany will establish at least 30 GW offshore wind by 2030, 40 GW by 2035 and 70 GW by 2045.

“With the REPowerEU plan announced, the EU is giving another boost to renewable energy and reducing our dependence on fossil fuels, especially Russian gas,” adds EU Energy Commissioner Kadri Simson. “As part of the measures to accelerate the green transition, we have proposed to make permits in the EU faster and more streamlined, which will help us to make full use of the offshore wind potential in Europe. The North Sea is the perfect place to go ahead and upscale offshore winds quickly, and I welcome today’s ambitious announcements. It is symbolic that we are opening this new chapter in Denmark, the birthplace of offshore wind technology.”