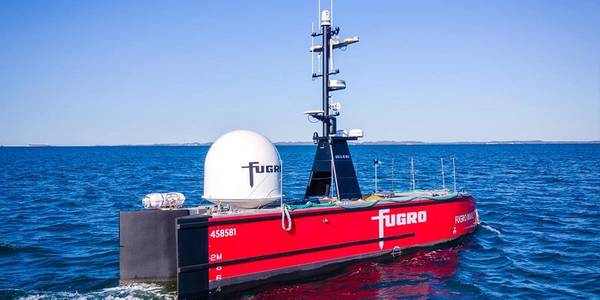 Fugro’s Blue Essence next-generation USVs are operated remotely from onshore remote operations centers (ROCs) and the Fugro Maali is the first Blue Essence in service anywhere in the world. The name Maali is a Noongar term for “black swan”, which is both the state bird and emblem of Western Australia, where the USV is based.

The USV remote inspection, the first to be completed by the new USV, comprised a multibeam survey, visual inspection and cathodic protection assessment of the gas trucklines to comply with Woodside and regulatory requirements. Fitted with an electric remotely operated vehicle (eROV), the USV mobilized at the end of April and was controlled from the Woodside-operated King Bay Supply Facility and Fugro’s ROC in Perth, approximately 1,500 kilometers south of the Woodside trunklines. During the one-month project, Fugro’s remote operations team navigated approximately 1,300 nautical miles in the surrounds of Dampier Port, one of the busiest resource ports in Australia, without incident and consuming a total of only 3,300 liters of diesel, reducing CO2 emissions by 97% compared to a traditional vessel. Fugro’s bespoke remote operations and robotic control architecture allowed the USV and eROV to be operated over large distances with minimal latency and high reliability, ensuring the USV operators maintained control of the vehicles in real time, just as if they were controlling them from a conventional vessel bridge.