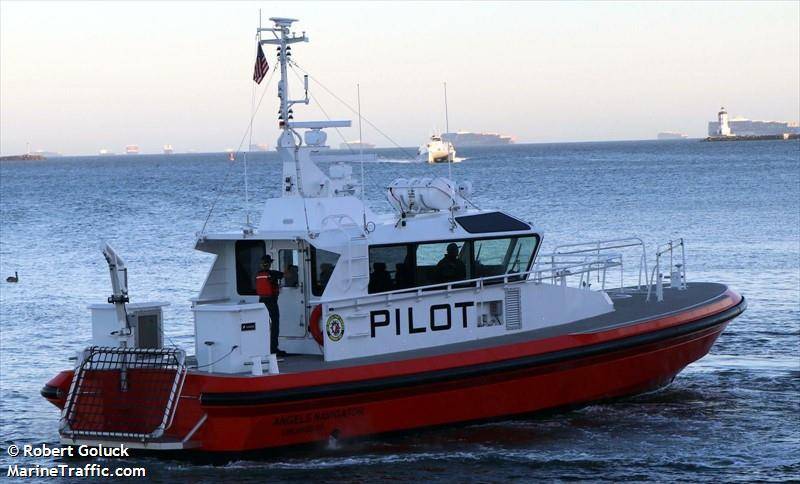 The Los Angeles Pilot Service has taken delivery of two new pilot boats equipped with full suites of quality Furuno marine electronics. The 56-foot Angels Pilot and Angels Navigator have been outfitted with complete integrated helm suites designed to assist in their mission of piloting ships in and out of Los Angeles Harbor, the busiest seaport in the western hemisphere. The pair of Camarc-designed boats were built by Vigor Industrial in Vancouver, Wash., and have made their way to their homeport in Los Angeles.

The helm suites aboard the Angels Pilot and Angels Navigator feature a Furuno black box NavNet TZtouch2 TZT2BB multi function display connected to both 19” and 24” multi-touch displays, the MU195T and MU245T. With the ability to output full HD video in multiple aspect ratios, this combination of black box MFD and dual HD monitors maximizes space at the helm, allowing for an efficient workspace. The TZT2BB can be controlled from either of the multi-touch displays with a newly-enhanced user interface, or from the MCU002 Remote Control at the helm. Each vessel is equipped with dual DRS6ANXT Solid State Doppler Radars that provide key benefits to enhance the safety and security of the crew, such as Target Analyzer and Fast Target Tracking. Target Analyzer automatically changes the color of approaching targets from green to red, allowing the navigator to instantly identify hazardous targets. Fast Target Tracking produces immediate, accurate tracking information for targets, displaying a course vector as well as the target’s speed, as well as sounding an alarm for approaching targets.

Angels Pilot and Angels Navigator are also equipped with Furuno’s 30-watt LH5000 Loud Hailer, SC33 Satellite Compass, FA170 AIS, and RD33 Data Organizer. The electronics were selected by the Los Angeles Pilots Association in conjunction with Furuno USA and procured through Mackay Marine of Tacoma, Wash.. Installation was performed by Superior Marine Services, Inc. while the vessels were near completion in Vancouver, Wash.

Angels Pilot and Angels Navigator were built as replacements for two recently retired pilot boats, Phineas Banning and Stephen M. White. They will serve the L.A. Pilots Association in their mission to safely guide ships in and out of Los Angeles Harbor.