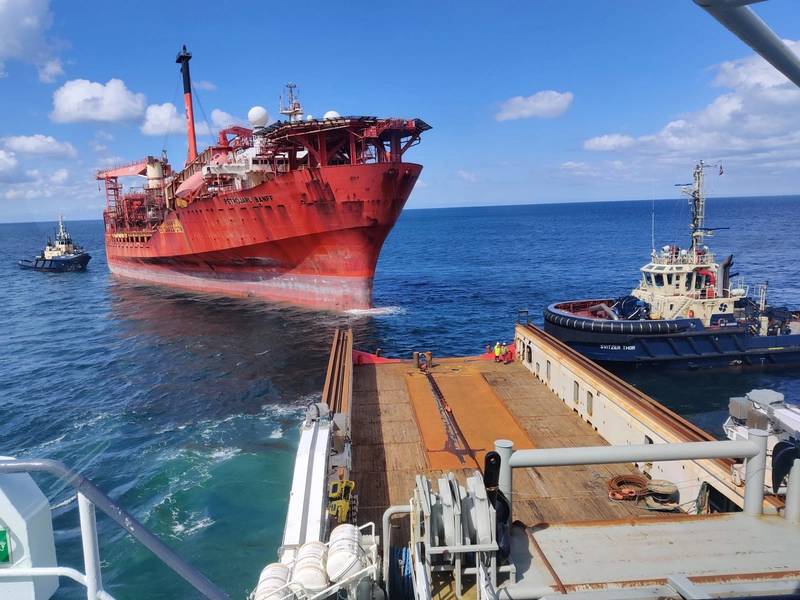 Teekay’s Petrojarl Banff FPSO completed its final voyage on May 8, 2021, and is now moored alongside the Modern American Recycling Services Europe A/S (MARS) quayside in Frederikshavn, Denmark in preparation for recycling.

The decommissioned FPSO, which ceased production in the U.K. North Sea in 2020, had been moored at Kishorn Port on the northwest coast of Scotland since September 2020. The tow of the FPSO from the Kishortn Port to Frederikshavn started on May 2, ending on May 8.

The Banff FPSO had been producing oil for CNRI at the Banff and Kyle fields, some 200 kilometers east of Aberdeen in approximately 90 meters – 95 meters water depth.

“After decades at sea, at the end of their life, ships are recycled—the vessel is dismantled, and steel and other valuable materials are recycled. It is the most responsible way of disposing of a vessel, since almost every part of the ship is reused, but it needs to be done in a safe and socially responsible manner,” Teekay said this week, announcing the imminent start of recycling works on the FPSO in Denmark.

The FPSO will be recycled at M.A.R.S. Europe’s EU-approved facility in the Port of Frederikshavn, Denmark.

“For many who have worked on the vessel over her 21-years in operation in the rough waters of the North Sea, May 8 marked a final milestone for the affectionately called, “Old Lady” as she arrived at her destination for her forthcoming dismantlement and green recycling,” Teekay said.

Additionally, Teekay said it had engaged DNV to carry out an independent assessment of the facility against the requirements of the EU Ship Recycling Regulation and the Hong Kong Convention. M.A.R.S. has the necessary permits and capabilities in place to manage the recycling process for a unit such as the Banff FPSO.

“The recycling process is expected to take approximately 12 months, during which time Teekay will have representatives on-site to ensure the unit is green recycled in compliance with all applicable EU regulations as well as our own vessel recycling policies that go above and beyond the Hong Kong Convention,” Teekay said.