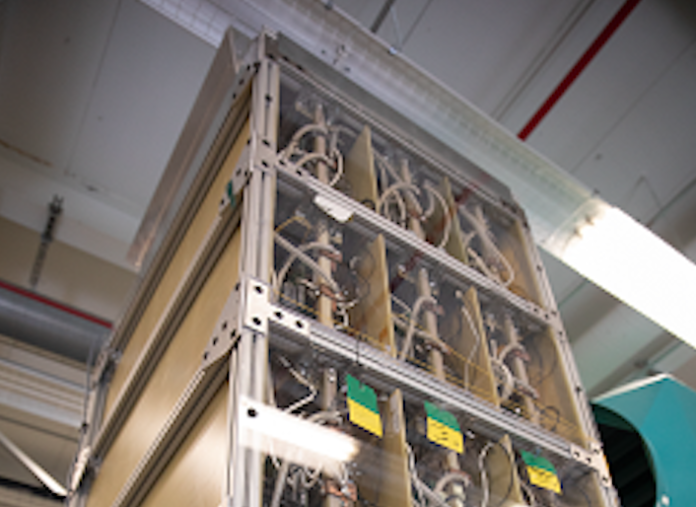 A team of engineers in the Electrical Systems group at GE Research have achieved one of the world’s firsts in the power conversion sector, demonstrating a MW-scale modular, multi-level wind power converter in its lab in Upstate New York.

To pull off the wind converter demonstration, GE engineers turned one of their labs on campus into a virtual 3.5 MW wind turbine outfitted with an actual wind generator and gearbox from GE’s Renewable Energy business. GE scientists then developed, built and integrated its modular, multi-level “Tower of Power,” as it was coined by the team, into this virtual environment. The setup allowed the converter to be tested under real conditions as if a 300+ foot high wind turbine was standing tall and spinning in the middle of GE’s Research campus.

“The ability to build and test this type of breakthrough modular power conversion architecture at scale is a testament to the power of government partnership and industrial research in translating new technology into real solutions that transform the future of energy,” says Nathaniel Hawes, project leader and principal engineer in the Electrical Systems group at GE Research. “Through our work on this project, we have advanced the ball on future wind converter technology and created more potential opportunities to deploy this technology in other parts of the power conversion sector.”

Today’s power conversion systems typically can operate for long periods of time, but when a single circuit board goes down, the whole system is temporarily disabled. With obsolescence often encountered around parts to repair it, these repairs are often delayed. With a modular architecture, the dynamic is totally different.