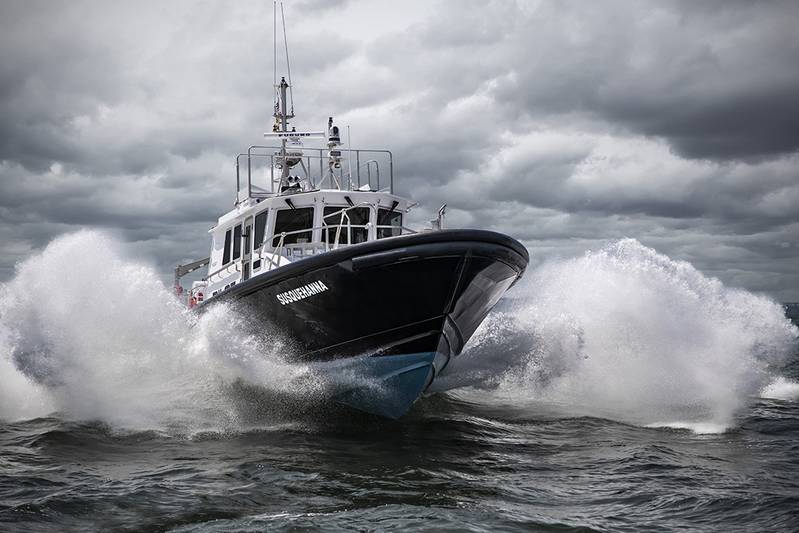 The Association of Maryland Pilots has taken delivery of its fourth Chesapeake class launch from Gladding-Hearn Shipbuilding, Duclos Corporation.

Twenty-two Chesapeake class pilot boats have been delivered to 12 pilot associations throughout the U.S. since the launch was introduced by the Somerset, Mass., shipyard in 2003.

With a deep-V hull designed by Ray Hunt Design, the new all-aluminum launch measures 52.6’ overall, with a 16.8’ beam and a 4.8’ draft. Powered by twin Volvo Penta D16, EPA Tier 3-certified diesel engines, each producing 641 Bhp at 1,800 rpm, the vessel’s top speed is over 26 knots. The engines turn five-blade Bruntons NiBrAl propellers via ZF500-1-A gear boxes. A Humphree interceptor trim control system, with its Automatic Trim Optimization, is installed at the transom. The launch is equipped with a 12kW Northern Lights genset and 100% LED lighting.

The vessel’s wheelhouse, with a small trunk, is installed amidships on a flush deck. With electrically heated forward-leaning front windows, the wheelhouse is equipped with five NorSap shock-mitigating reclining seats, a baggage rack and control console. The forecastle includes a Porta-Potty, split upholstered settee/bunk, lockers for tools and safety gear safety gear and a custom immersion suit RACK. The vessel’s interior is heated and cooled by two 16,000 Btu reverse-cycle HVAC units, in addition to a 2,000 watt 240 VAC heater in the wheelhouse and in the forecastle.

Outside the wheelhouse are heated side-decks and handrails to prevent ice accumulation. An aft ladder leads to hinged boarding platforms on the roof. A control station is at the transom, along with a hydraulically powered J-Basket rescue system, for pilot rescue operations.