ESB said that its Atlantic @ Moneypoint project was is a multi-billion Euro program with significant investments planned on the site over the next decade resulting in hundreds of jobs.

The company has said it has started work on transforming Moneypoint into a green energy hub, breaking ground on a new €50m Sustainable System Support facility in the coming weeks explaining that  “this Synchronous Compensator will be the largest of its kind in the world.”

The new plant will provide a range of electrical services to the electricity grid which would previously have been supplied by thermal fired power stations. Its operation will enable higher volumes of renewables on the system, ESB said. 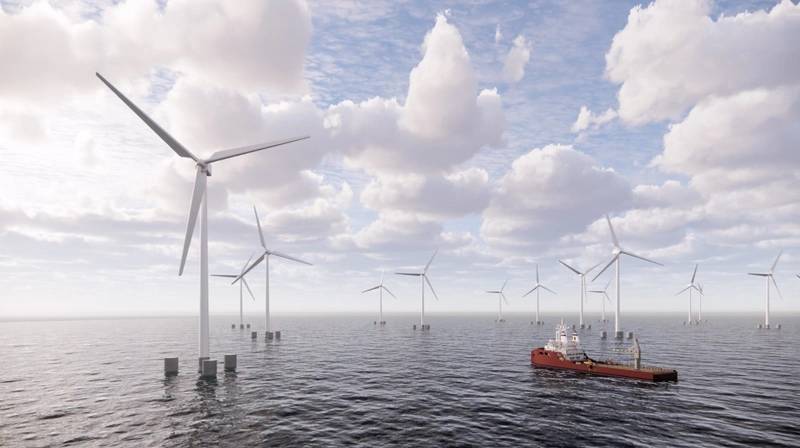 ESB said that a floating offshore wind farm of 1,400MW will be developed off the coast of Counties Clare and Kerry in two phases by ESB and joint venture partners, Equinor.

Once complete, the wind farm will be capable of powering more than 1.6 million homes in Ireland. Subject to the appropriate consents being granted, the wind farm is expected to be in production within the next decade.

The reimagined Moneypoint site, which is expected to stop all generation from coal no later than 2025, is planned to become a center for the construction and assembly of floating wind turbines.

“A deep-water port already exists at the site, making it an ideal staging ground for the construction of the wind farm. It is expected this will generate a significant number of direct jobs in the Mid-West region,” ESB said.

In the longer term, the development of Moneypoint will support wider plans of Shannon Foynes port, and working with local stakeholders, help make the Shannon Estuary a focal point for the offshore wind industry in Europe, the company said.

ESB said that the Moneypoint was one of the deepest ports in Europe, an essential element of the project, as the ships used to deliver wind turbines need to dock in a deep-water port.

“The presence of the deep-water port at this facility also allows for wind turbines to be brought back on shore for service and maintenance as required. Finally, the deep-water port will allow easy access for ships which will be used to export hydrogen to Europe,” the company said.

Hydrogen site by the end of the decade

Furthermore, ESB’s plans include investment in green hydrogen production, storage, and generation facility at Moneypoint towards the end of the decade.

“A clean, zero-carbon fuel, green hydrogen will be produced from renewable energy and used for power generation, heavy goods vehicles in the transport sector and to help decarbonize a wide range of industries such as pharmaceuticals, electronics and cement manufacturing,” ESB said.

Pat O’Doherty, ESB Chief Executive, said: “ESB’s Brighter Future strategy is anchored in our ambition to lead the transition to a low-carbon energy future, powered by clean electricity. The transformation of Moneypoint into a green energy hub will be a major step in achieving this and will bring huge benefits to the Mid-West and beyond. We have long signaled our intention to cease burning coal at Moneypoint. Today we are unveiling plans for a reimagined Moneypoint, which will not only create hundreds of jobs, but will also help Ireland to meet its climate targets and maintain secure supplies of electricity into the future.”

Jim Dollard, ESB Executive Director, Generation and Trading, said: “Today’s announcement is a significant milestone in ESB’s low-carbon journey, cementing our commitment to transforming our generation portfolio and ongoing investment in renewable energy technologies. Moneypoint has played a critical role in the country’s energy supply for almost 40 years. We are proud that it will continue to have a crucial role in Ireland’s energy future with many benefits for the local community and wider society.”