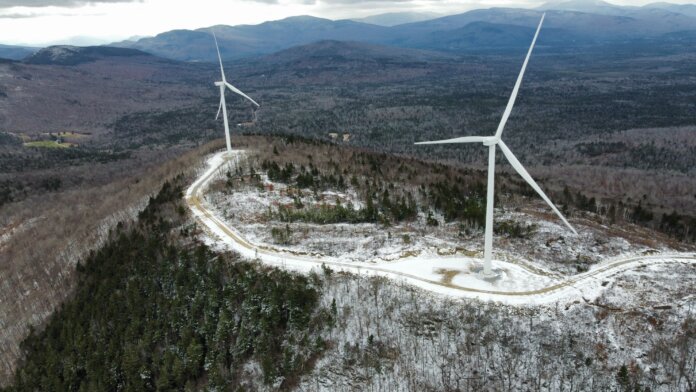 Greenbacker Renewable Energy Company LLC’s (GREC) RoxWind, a 15.3 MW DC wind farm, has entered commercial operation. When it was acquired in 2020, the to-be-constructed project in Roxbury was Greenbacker’s first asset in Maine. Since then, the company has acquired four other assets and steadily built out its pipeline of renewable energy projects there, with RoxWind being its first in the state to reach the commercial operation milestone.

The RoxWind project’s wind power is expected to produce nearly 50,300 MWh of annual clean energy. The project has also supported – and continues to provide – local clean energy jobs, including approximately 80 jobs during its construction, dozens of subcontractors for ongoing maintenance and special projects, and four full-time service technicians.

The wind farm is Greenbacker’s largest sustainable infrastructure asset in Maine. Its four turbines are also the biggest in the company’s fleet, by both capacity and length. Each of RoxWind’s turbines can produce over 3.8 MW of wind power and has a rotor diameter of 137 meters.

“RoxWind is a win for all involved, delivering affordable clean power to consumers and driving a future powered by clean energy,” says Charles Wheeler, CEO of GREC. “This milestone is a testament to the Town of Roxbury’s support, and a credit to the expertise of the development teams at Palmer Capital, Solaya Energy, and Horseshoe Valley Wind, with whom we look forward to partnering again.”

“We are pleased to have partnered with GREC, with their active footprint in Maine, to construct and commission this project in the Town of Roxbury,” states Lindsay Deane-Mayer, senior vice president from Palmer. “Bringing a project online is the culmination of many years of focus by the entire development team, the Town, and various stakeholders. We are grateful for everyone who participated in bringing this project from concept to commercial operation. This project, dedicated to our partner John G. Richardson, will generate clean energy for decades as part of his legacy of giving back to his home state.”