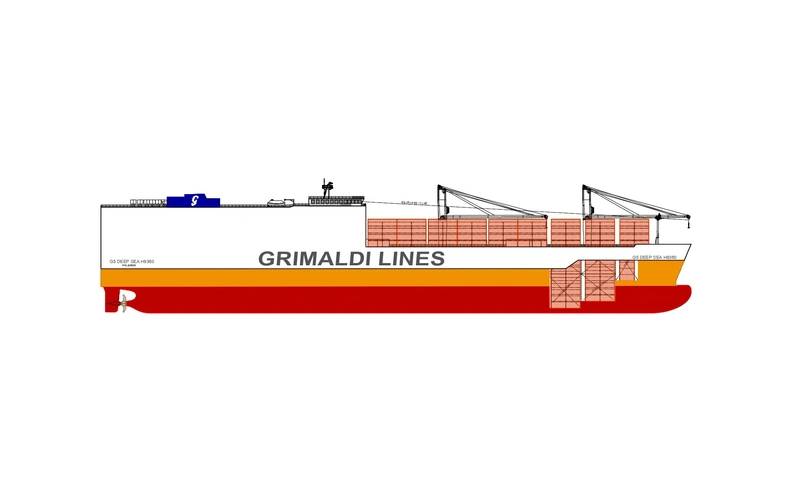 The Grimaldi Group said it signed an order contract worth more than $500 million for the construction of six new ro/ro multipurpose vessels at Hyundai Mipo Dockyard Co. Ltd (Ulsan) in South Korea.

With a length of 250 meters, a beam of 38 meters and a deadweight of 45,684 tonnes, the six newbuilds  are expected to be delivered for Grimaldi’s Neapolitan Group between the first months of 2023 and the end of 2024. The vessels will replace older 25-year-old-plus tonnage and will be deployed between North Europe and West Africa, particularly to Lagos, Nigeria.

The new ships will inaugurate the new G5 class, an evolution of the previous G4 class vessels built by the same shipyard and delivered to the Grimaldi Group between 2014 and 2015. The G5 ships will be able to transport 4,700 linear meters of rolling freight, 2,500 (car equivalent units) and 2,000 TEU (20 foot equivalent units). Compared to the previous G4-class vessels, the new ships will have the same capacity for rolling freight while container capacity will double.

The G5 vessels will also allow a reduction of CO2 emissions per tonne transported of up to 43% compared to other Grimaldi multipurpose ro/ro ships, the shipowner said.

Both the main engine and the auxiliary diesel generators will meet the NOx levels imposed by the Tier III regulation, while the integrated propulsion system between rudder and propeller will minimize vortex losses and, consequently, optimize propulsive efficiency and reduce fuel consumption.

The scrubber-equipped ships are designed for shoreside supply of electricity at berth, and the electrical consumption of onboard machinery (pumps, fans, etc.) will be reduced thanks to the installation of variable frequency drive devices.

“The new series of ro/ro multipurpose G5-class ships was designed to respond even more efficiently to the demand for quality transport services on deep sea routes, reconciling the needs related to international freight traffic with that of protecting the environment,” said Gianluca Grimaldi, President of Grimaldi Group SpA. “We are thus taking a further, important step within a path undertaken for years now with the aim of operating on all our main routes with an increasingly young, modern and eco-sustainable fleet.”