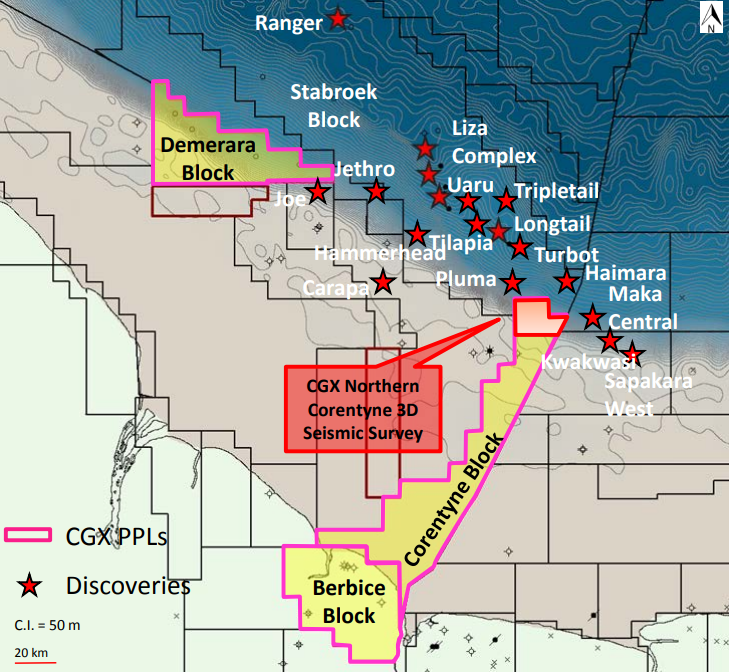 Oil and gas company CGX, the operator of the Corentyne offshore block in Guyana, has, with its partners been given more time to drill a well in the block.

Frontera Energy Corporation, a CGX partner in the Corentyne block, said Friday that, following talks with the Guyanese government over their work program which has been affected by the pandemic, the joint venture has been given a year to drill the next well.

According to CGX’s recent report on the Corentyne block, the company has recently completed a preliminary evaluation of the recently processed 3D seismic data over the block, and has identified two potentially highly prospective large channel sand reservoir complexes.

These channel complexes are interpreted to contain multiple high potential leads located in the northern region of the Corentyne Block which is located in close proximity to the Stabroek Block offshore Guyana and Block 58 offshore Suriname, where ExxonMobil and Apache have made several oil discoveries, respectively.

Per information shared by CGX, the leads mapped in the Northern Corentyne Block are interpreted to be situated at the same geological horizons as the nearby significant discoveries already proven in the Stabroek Block and Block 58.

Also, the Northern Corentyne leads are interpreted to share the same proven hydrocarbon generating basin and intervals in which the current discoveries are located. These leads are primarily stratigraphic traps composed of sandstone accumulations and deemed to be analogous to many the discoveries already proven to be successful in the Guyana basin spanning both Guyana and Suriname.