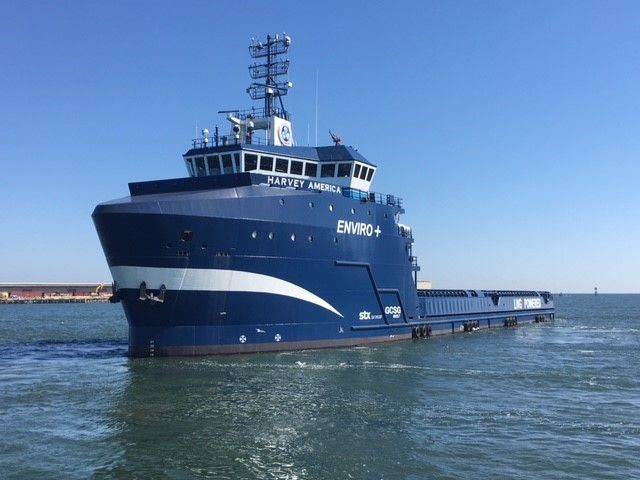 The company announced on Monday that one of its tri-fuel vessels has started operating exclusively on battery power and renewable liquefied natural gas (RLNG), with diesel fuel as back up, moving the New Orleans-based firm a step closer to becoming the world’s first ESG certified oil and gas vessel operator.

“We always knew the day would come when investors and customers would demand low, or in this case, carbon neutral, zero emission platform supply vessels,” said Shane Guidry, Harvey Gulf CEO. “Harvey owns the only ones in the world operating today and the only ones that will ever be operating in the United States, unless our competitors want to build new dual fuel LNG vessels, or tri-fueled like these at a cost of $113 million per vessel. I don’t see that happening, as you will never get a day rate from the end user that will support the $113 million construction cost.”

Guidry said all five of Harvey Gulf’s 310-foot PSVs can operate carbon neutral utilizing RLNG. “For those oil companies that really want to do all they can to reduce emissions while drilling for oil, we have boats that they can now charter to deliver the drilling rigs’ needs while burning carbon neutral fuel,” he said.

The carbon natural RLNG being consumed on board is a blend of low carbon intensity (CI) sourced bio-methane from the swine and bovine industries. The natural methane produced from the waste/byproduct of the pork and dairy sectors is recovered via digesters. The processing of the waste and extracting of the methane, results in negative carbon intensity (CI) scored renewable gas. Through blending at Harvey Gulf’s LNG fueling terminal (the only one in America), the company can achieve net zero carbon neutral fuel burn where by low CI score RLNG is blended with locally available LNG. An example would be blending local sourced LNG with a CI score of +80LNG with RLNG with a CI score of -440, the net zero blend would be at a ratio of 5.5:1.

Harvey also announced it ordered 25 electric trucks for its employee fleet. All will replace existing combustion engine vehicles and be used to support the company’s vessel operations and efforts to continue down the decarbonization path.