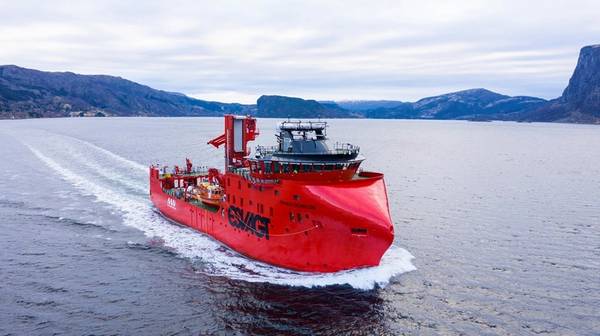 The vessel that was handed over on Friday is the last in a record series, but also the first in a new series to be delivered to Esvagt.

“The ship is vessel number four and design number eight in the long-term collaboration between two spearheads in the offshore wind industry; Esvagt, the Danish offshore wind pioneer, and Havyard, the first company to offer special designs for offshore wind vessels and now also the company behind a long line of world-leading windfarm service vessels,” Havyard said.

While the first vessel has been completed, work is well underway on the second vessel, and the third is being towed to the yard in Leirvik, scheduled for arrival early next year, Havyard said.

Jan-André Førde Systad, Project Manager at New Havyard Ship Technology said: “‘Esvagt is a good customer that we have worked with for a long time. We know their systems and their expectations, so the ship we’re handing over is a very good one. Now we’re looking forward to starting work on the next vessel.’

Norwegian Electric Systems, also part of Havyard Group, has delivered the energy design, control systems, and complete propulsion system for the vessel. New Havyard Ship Technology, on its part, has fitted out, tested, and completed the vessel, which will now be sent to Belgium where equipment will be brought on board to prepare the vessel for assignments on the field already before the turn of the year.