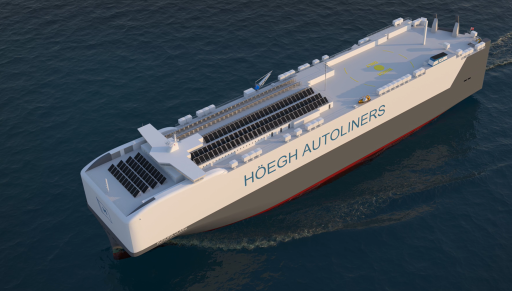 Under the agreement, the first two 9,200 CEU vessels will be delivered already for delivery in the second half of 2024.

The Aurora class’ multi-fuel engine can run on various biofuel and conventional fuels, including LNG and ammonia. The ships will also feature strengthened decks and enhanced internal ramp systems.

Once delivered, the vessels will be the world’s largest and most environmentally friendly car carriers, according to the company.

“We are excited to have secured delivery of the first Aurora class vessel already by 2024. It will be the first Ammonia ready vessel in its segment and the largest car carrier ever built. The Aurora class will bring cargo efficiency to a new level and put us in the forefront of sustainable shipping,” Andreas Enger, Höegh Autoliners CEO commented.

China Merchant Industry has been expanding its shipbuilding business over the past two years. The Chinese firm owns Deltamarin, which has been tasked by Höegh Autoliners to design the new Aurora Class.

Höegh Autoliners’ ambition is to reach a net zero emissions target by 2040, with plans to have its 1st zero-carbon ready car carrier by 2023.

Since 2008 the company has achieved a reduced carbon intensity of 37 per cent across its fleet which is in line with the International Maritime Organisation’s (IMO) zero-emission targets.