Posted by tesla@jabvertising.com on December 28, 2021 | Featured 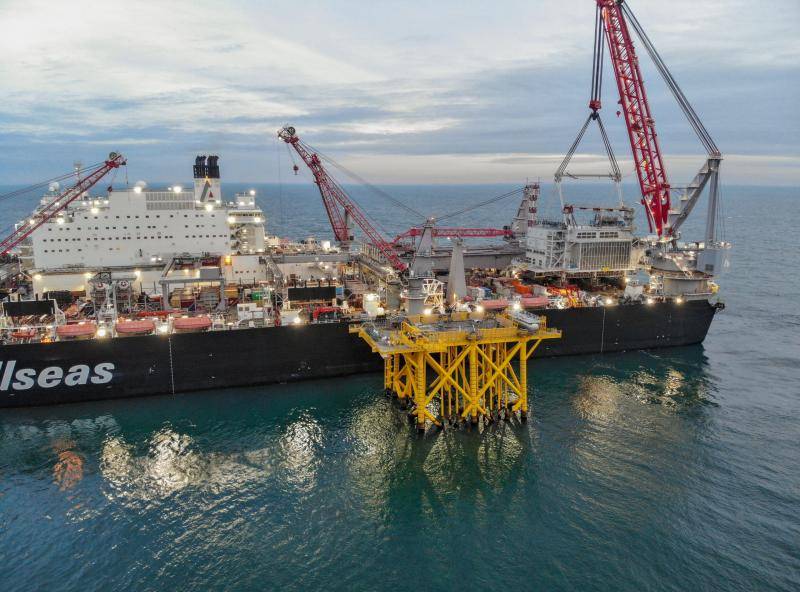 The offshore transformer station of the Hollandse Kust (zuid) Alpha platform is successfully installed on the jacket in the North Sea, about 20 kilometers off the coast of The Hague, on Sunday. The transformer station is one of the two topsides of the Hollandse Kust (zuid) offshore grid, which will connect the offshore wind farm area with the same name to the Dutch onshore high-voltage grid.

Marco Kuijpers, TenneT’s Director of Large Projects Offshore, said, “With the installation of the Alpha topside, the offshore grid that TenneT is building in the North Sea is starting to take shape. Hollandse Kust (zuid) Alpha is the first connection of an offshore wind farm to the Maasvlakte, with a capacity of 700 MW. Wind energy plays a crucial role in the energy transition, also in industry, and I am proud that TenneT can contribute to a sustainable future in this way.”

From Dubai to the North Sea Over the past year, contractor Petrofac has been working on the fabrication of two high voltage alternating current (HVAC) transformer stations Alpha and Beta at the Drydocks World fabrication yard in Dubai. Mid-November, Mammoet, a specialist in heavy transport and lifting, took care of the weighing and loading of the 3,830-tonne Alpha topside onto the transport vessel Tai An Kou. From Dubai, the Tai An Kou sailed in one month to the Alexiahaven on the Maasvlakte, where it arrived on December 21.

Offshore company Allseas carried out the installation In the Alexiahaven, the Alpha topside was loaded from the transport vessel onto the multipurpose platform installation and removal vessel Pioneering Spirit of offshore company Allseas, which then sailed to the installation location in the North Sea. After completion of preparatory work, Pioneering Spirit accurately positioned the Alpha topside on the substructure, also known as jacket.

“It is great to be involved in an energy project of such strategic importance to the Netherlands,” said Edward Heerema, President and CEO of Allseas. “Pioneering Spirit has made a name for itself in recent years with record-breaking lifts for the oil and gas industry. The successful installation of the Alpha topside demonstrates the versatility of the vessel and our added value in the energy transition.”

Sami Iskander, Petrofac Group Chief Executive, said, “The safe installation of the Alpha topside is a significant milestone in the delivery of this important energy transition project. Everyone involved should be proud of this achievement. Petrofac has been building a successful track record in offshore wind for more than a decade now, which reflects the capability of our engineers and the quality of our delivery. We are collaborating closely with our partners on the upcoming delivery of the Beta topside and successful grid connection.”

The Beta topside – also with a capacity of 700 MW – is expected to follow in the first quarter of next year. When the wind farm area Hollandse Kust (zuid), developed by wind farm developer Vattenfall, is fully operational in 2023, it will generate an amount of renewably energy that is equivalent to the annual consumption of more than two million households. Hollandse Kust (zuid) is the first subsidy-free wind farm area in the world.