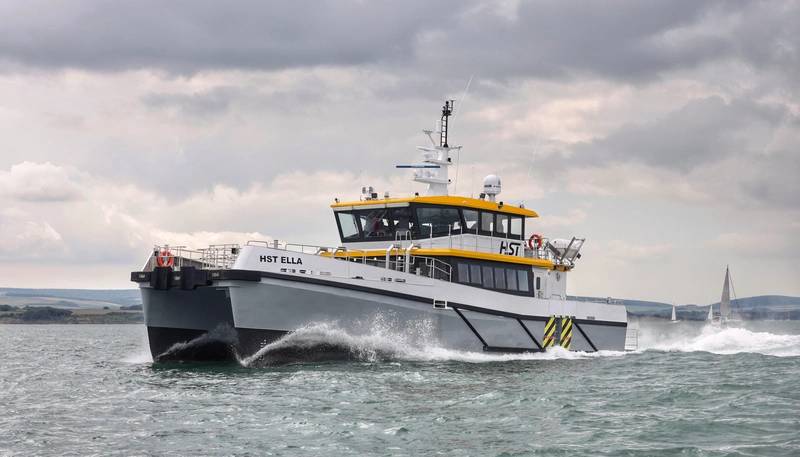 The vessel, designed by naval architects from Chartwell Marine, is the first hybrid Chartwell 24 vessel to hit the water, following its completion at the local Isle of Wight shipyard Diverse Marine.

Tom Nevin, Chief Executive Officer, HST said:”“Rapidly maturing hybrid technology means that environmental consciousness can sit hand in hand with operational excellence, and in the HST Ella, we have a vessel that delivers both, following a consultative design process with Chartwell Marine, and a high-quality build at Diverse Marine.”

The HST Ella offers transit speeds of 10 knots on electric propulsion and 30 knots on diesel, while during port operations, the vessel’s electric operation mode allows for quiet and zero-emission low-speed maneuverability, due to its hybrid propulsion system.

“An electric motor sits alongside a diesel engine to drive a high-performance changeable pitch propeller (CPP) system, ensuring superior maneuverability and operational flexibility. The system is coupled with the vessel’s advanced hull form for reduced frictional resistance, and its use of Hydrotreated Vegetable Oil (HVO30) as fuel – a market first for a new build CTV,” HST said.

According to the company, CTVs such as the HST Ella are increasingly expected to perform a range of auxiliary duties alongside personnel transport.

The 26-meter vessel is able to carry 24 industrial personnel alongside a maximum payload of 15 tonnes. Following its launch, the HST Ella will depart to begin its maiden contract at the East Anglia 1 (EA1) offshore wind farm.