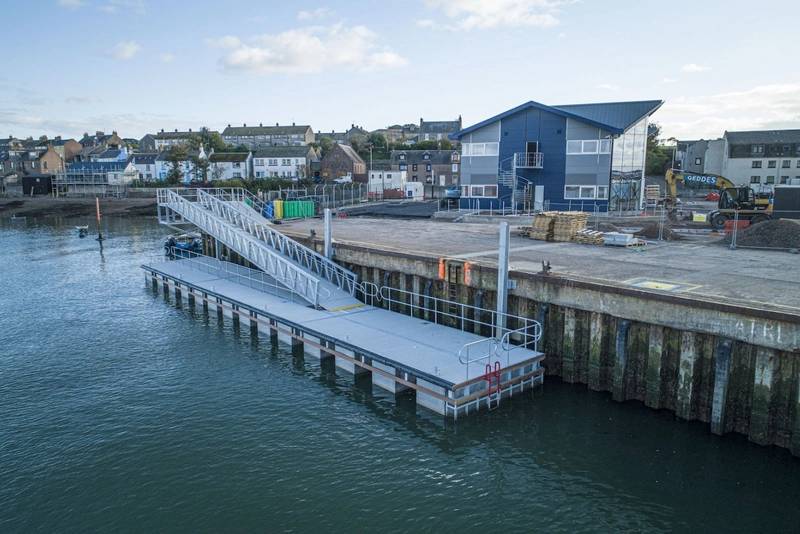 The new 30m x 4.4m pontoon will allow safe berthing and access for crew transfer vessels (CTVs) to the new operations and maintenance (O&M) base for the wind farm which is currently under construction 27km off the coast of Angus.

“Located on Montrose Port’s South Quay, the new pontoon is topped with GRP decking suitable for a commercial application offering excellent anti-slip properties. This, coupled with the high-level task lighting, ensures safe working conditions for workers and CTV crews all year round, day and night, during the commissioning and ongoing maintenance phases of the offshore wind farm,” ICMS said.

Shoreside access to the new berth, and the vessels moored alongside, is via a bespoke 20m access gangway with a cantilevered shore frame platform.

“It’s been fantastic to be involved in a project which is so key to the provision of renewable energy in Scotland and the rest of the UK,” says Calum MacDougall, engineering sales manager (Scotland) at ICMS. “We worked closely with Seagreen, the Montrose Port Authority and Arch Henderson to create a bespoke, cost-effective solution, taking into account the existing infrastructure of the port.

“Our highly experienced in-house design team produced a design that moored the new pontoon to the quayside using vertical H-beams, as opposed to using driven piles, ensuring the ongoing integrity of the existing quay walls.”

“The decision to award the contract for this project to Inland and Coastal Marina Systems has proved a very wise investment, with the resulting facility not only being extremely well designed and engineered, but delivered on time and on budget.”

Loaded on a barge at Global Energy Group’s Port of Nigg in the Highlands of Scotland, two jackets last week arrived at the site 27km off the coast of Angus, where they were met by the Saipem 7000 – the semisubmersible crane vessel which is used to lift each of the 2,000-tonne jackets.

The installation marked the start of works for the 1.1GW Seagreen Wind Farm project site, a £3bn joint venture between SSE Renewables and TotalEnergies.

When completed, the Seagreen Offshore wind farm, owned by SSE Renewables and TotalEnergies, will be Scotland’s largest, and the world’s deepest, fixed-bottom offshore wind farm. It will be able to provide enough electricity to power 1.6 million homes.