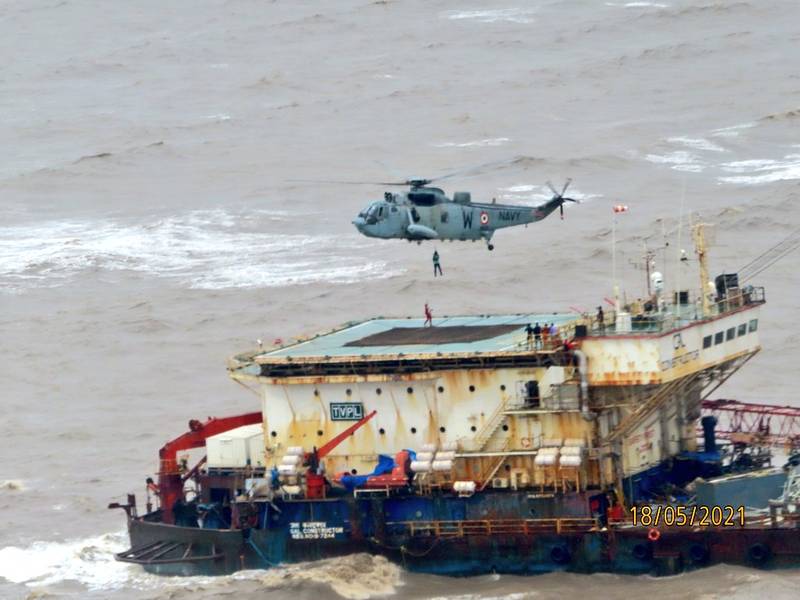 India’s army and navy deployed ships and aircraft as they searched for 26 people still missing more than three days after a powerful cyclone sank a barge off the country’s west coast, killing 49 people on board.

Cyclone Tauktae, the most powerful storm to barrel into the west coast in two decades, has killed at least 46 others after wreaking havoc in the states of Gujarat, Maharashtra, Goa, Karnataka and Kerala.

“Ships and aircraft continue to search for the remaining crew,” Navy spokesman Mehul Karnik said in a statement on Thursday evening.

Around 186 people have been rescued out of 261 on board the barge, which sent an SOS on Monday after its anchors gave away, leaving it floating adrift. The barge, carrying mostly construction workers, sank near oilfields around 70 km (45 miles) southwest of Mumbai.

“As the barge started to sink, my nephew jumped into the sea and stayed in the water for nine hours until the navy came to his rescue,” said Sanjay More, a relative of one survivor.

Rajnish Singh, the relative of another, told Reuters that all the workers on board had lost their mobile phones but that he had seen footage of his brother being rescued on television and knew he was safe.

A sailor involved in the rescue mission told Reuters he saw several life jackets floating in the sea. The difficult weather conditions and huge waves had delayed the rescuers, he said.

The barge was owned and operated by Durmast Enterprises and was chartered by Afcons Infrastructure Limited, a construction and engineering company based in Mumbai and engaged in contract work for Oil and Natural Gas Corp. (ONGC), India’s top exploration company.

“Durmast is the owner and the responsibility for marine operations rests with the vessel owner and his marine crew stationed on the vessel,” Afcons said in a statement, adding that its construction workmen were on the barge.

The storm weakened after making landfall on Monday night in the state of Gujarat, although the extent of damage it has caused on land is not yet clear.

India’s Meteorological Department said another cyclone was developing on the east coast. The government said the Indian Coast Guard had begun taking measures to prepare for it and was closely monitoring the situation.

Separately, nine fishermen from the southern state of Tamil Nadu have yet to be located, according to the state’s opposition leader, who has asked the government to order a search.