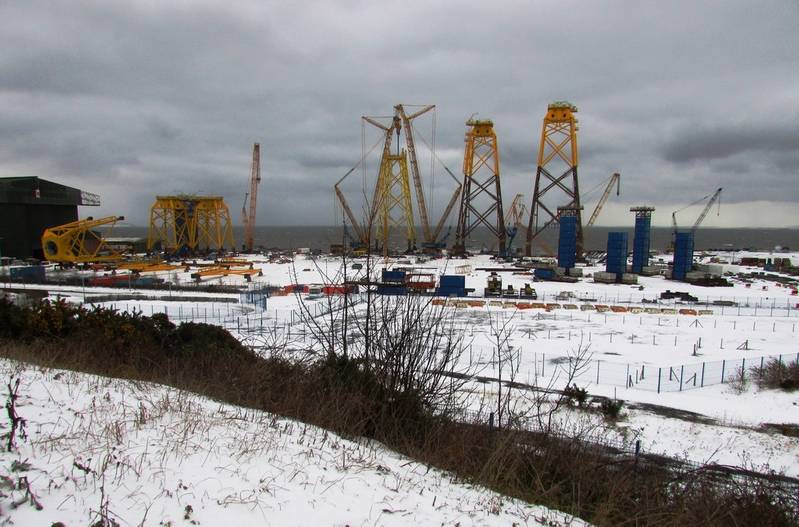 UK-based infrastructure firm InfraStrata has said it has acquired “substantially all of the assets of Burntisland Fabrication,” also known as BiFab, a company that entered into administration in late 2020.

BiFab specializes in major fabrication works from facilities in Scotland for the oil and gas, renewable, and infrastructure industries.

Infrastrata said the acquisition provided it with increased capacity across two sites in prime locations in Scotland with particular regard to renewable and defense projects; Methil on the east coast of Scotland and Arnish on the west coast of Scotland.  The Burntisland site will not form part of the transaction.

The company paid £650,000 in cash for the assets with further deferred consideration of up to £200,000 in cash, subject to achievement of future revenue targets.

Infrastrata, which in 2019 bough Harland & Wolff, a Belfast based yard that built the Titanic, said the newly acquired BiFab assets would trade under the Harland & Wolff brand “and represent the final fabrication piece of its UK footprint, positioning the company to fully deliver on its  its existing strategy quicker than it would have done with only its two existing sites: Harland & Wolff (Belfast) and Harland & Wolff (Appledore).

The acquisition includes over 25,000m2 of undercover fabrication capacity acquired, with 580,000 m2 of total site area and 24,000 tonnes of quayside load-out capabilities, and annual throughput tonnage potential estimated at over 100,000 tonnes and waterfront sites capable of load in, load out and launching activities.

Infrastrata noted that sites are in close proximity to an array of wind farm projects currently ongoing and planned in the Irish Sea and the North Sea; with significant fabrication capabilities added through the acquisition.

According to the company, the acquisition brings numerous historic pre-qualification and live tender opportunities in addition to the track record in the oil & gas and renewables markets that Bifab has already established.

“The assets acquired and up to 29 existing employees will come under the newly formed Harland & Wolff (Methil) Limited, a fully owned subsidiary of the Company; employees are currently on furlough and will be brought back as required to re-establish operations at the sites,” Infrastrata said.

The company further said that the reason for the acquisition was the fact there is a shortage of UK shipbuilding and heavy fabrication capacity, as well as the wish to target the growing offshore wind opportunities in the region.

“In 2019, the Company set out its objective of being revenue generating as quickly as possible and the acquisition of Harland & Wolff (Belfast) was quickly followed by the acquisition of Harland & Wolff (Appledore).  As the year has evolved, it has become more obvious than ever that the UK lacks sufficient shipbuilding and heavy fabrication capacity. This has been exacerbated by the Government’s twin strategy of rejuvenating the shipbuilding sector coupled with the “Green Industrial Revolution,” Infrastrata said.

“Following recent announcements in relation to shipbuilding with a specific reference to Belfast and Appledore, management believes that the shipbuilding strategy that it has put in place is closely aligned to Government policy and could lead to some large contracts, both from Government and the private sector. Accordingly, a number of negotiations are currently taking place with a view to consummating multiple shipbuilding contracts, conversion projects and significant fabrication works in due course,” the company added.

Furthermore, Infrastrata said its management’s view was that wind farm fabrication is set to grow exponentially has been reinforced by the announcement of the  Government’s “Green Industrial Revolution” ; legislation expected to be put in place to promote local content for wind farm developments; the latest Crown Estates Round 4 leases awarded to BP and RWE for 3GW each of wind projects in the Irish Sea and Dogger Bank.

As shared by Infrastrata, the acquisition will include the following key assets:

·      12-year leases on both Methil and Arnish facilities; assignment of leases / entering into of new leases to commence upon finalization of landlords’ due diligence, expected to complete within the next four weeks, after which assignments of the leases are expected to commence. As a back stop should the negotiations not prove fruitful, the leases will be assigned on the same basis as the previous tenant.

John Wood, CEO of InfraStrata, commented: “I am very pleased to have completed the acquisition of the assets of Bifab, which is in keeping with our stated strategy of capitalizing on complementary opportunities when they present themselves. Whilst the total consideration is not material, relative to our balance sheet size and market cap, it nevertheless is a very important and highly strategic acquisition for InfraStrata. With this acquisition, we now have a footprint in Scotland, which is the hotbed for major wind farm projects as well as for shipbuilding programs.

We have now positioned ourselves strategically across the UK, with four sites capable of servicing our five core markets. This acquisition gives us the flexibility to optimize our operations across the Group and offer our clients the ability to fabricate faster and de-risk their exposure by offering multiple sites.

“As we move into larger contracts, it is crucial that we demonstrate the capacity to bid for and deliver on these projects. The acquisition of Bifab’s assets delivers that capability to us and will open up a larger demographic of tender opportunities. Most importantly, it is expected to substantially boost our existing sales pipeline success rate given that the fabrication risk carried by the project developers will drop significantly since we will now be more favorably located geographically than others.

“Finally, I wish to warmly welcome the person whom we have taken on at Methil and Arnish and I am confident that we will turn these facilities into highly successful businesses that generate jobs and investment into their local economies in due course.”