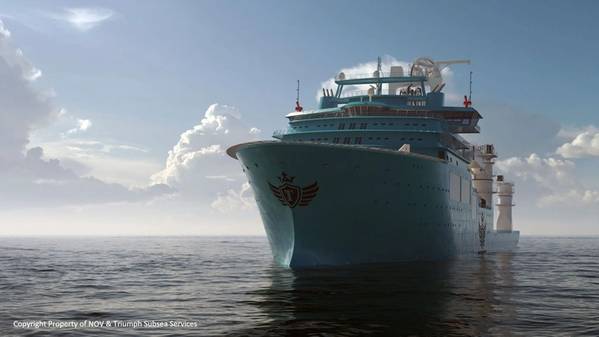 Triumph Subsea Services last week said it had cancelled a letter of intent with Infrastrata related to the proposed construction of an offshore wind development vessel, said it wouldn’t build any vessels with Infrastrata or any of its shipyards. Responding to Triumph, Infrastata said Triumph had not achieved any of the milestones required to proceed with the shipbuilding project.

The two companies had signed the Letter of intent for one firm and one optional ST designed 200m x 35m Windfarm Development Vessels (WDV), for floating windfarm installations, cable laying, and providing marine services for offshore carbon capture and green hydrogen projects. The vessels were to be built at Infrastrata’s Harland & Wolff Shipyard in Belfast, Northern Ireland.

Infrastrata said at the time that, once contracted, each vessel would be expected to generate revenues for Harland & Wolff of between £340 million and £360 million over the 24-30 month period of fabrication, followed by additional revenues if further through-life support contracts were secured.

However, come June 30, 2021, Infrastrata said it had set aside the Triumph project “for the time being as we do not have a high enough level of confidence in this project progressing to speculatively invest heavily in it at this time.”

A day later, Triumph said it had cancelled the LoI, accusing Infrastrata of not having sent it a commercial quotation and or vessel build schedule, and that based on not receiving “this vital information that forms part of a shipbuilding contract, no contract could be agreed or signed.” IT also suggested that InfraStrata may not have been financially capable of executing the contract with Triumph.

In a statement sent to Offshore Engineer on Monday, July 5, Infrastrata said:

“We note that in a recent statement Triumph Subsea Services Ltd (Triumph) have made various claims amongst which they claim to have terminated the Letter of Intent (LOI) entered into in December 2020 for a new build vessel. As noted at the time of updating the market, the LOI was non-binding on either party, had an expiration date of 30 June 2020 in the event a contract was not entered into, and therefore, by default there is nothing to terminate.”

“For a shipbuilding project to proceed, there are several key components required such as, inter alia, a credible counterparty with a proven management team, detailed technical specifications with equipment and a detailed design that has classification society approval along with equity and a credible route to debt funding.

“As part of the Company’s corporate governance process, prior to progressing from a rough order of magnitude price to a fixed price tender, it was established that Triumph had achieved none of the above milestones. Therefore, a decision was made to pursue other projects that had a far great probability of converting into credible vessel construction contracts.  Further, Triumph’s aspiration that the UK government would step in and provide the equity was an interesting concept, but we were unable to find any evidence of this being a reality.”

“The company will not issue any further statements on this matter, and we take this opportunity to wish Triumph Subsea Services Ltd all the best with their very ambitious project going forward,” Infrastrata said.