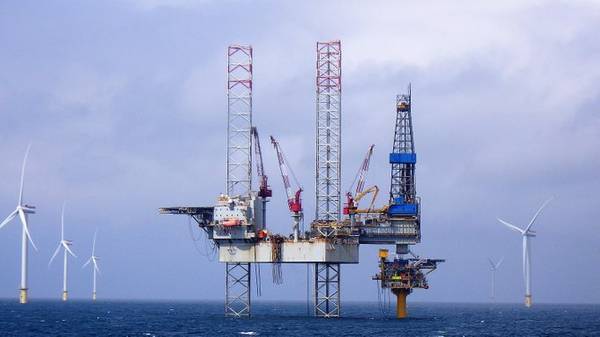 The Noble Hans Deul rig on location over the Blythe platform, with Dudgeon wind farm in the background. (File Photo: IOG)

UK-based oil and gas company IOG said Monday there had been an issue with one of the legs on the Noble Hans Deul jack-up drilling rig which recently moved to drill a well at its Southwark offshore field in the Southern North Sea.

“Over recent days the Noble Hans Deul jack-up drilling rig mobilized to Southwark following completion of the Blythe production well. Early on Sunday 10 October, during routine jacking operations after arriving at the field, an issue was identified on one of the legs of the rig and the installation process was halted. No drilling or associated works were ongoing at the time. The rig went to full muster while the issue was assessed and all 66 people on board are safe and well. There was no damage to the rig hull or to the Southwark platform,” IOG said.

According to IOG’s statement released Monday afternoon, the jack-up rig is stable and connected to tow boats while the crew assesses its condition.

“The priority of IOG and its drilling contractors remains the safety of all relevant personnel, ensuring the rig’s ongoing integrity and the safe and efficient continuation of the Phase 1 drilling campaign at the earliest feasible time,” IOG said.

IOG said that Noble Corporation, the rig owner, had launched an investigation into the cause of the issue.

“It is initially expected that the rig will be transported to port to undertake any necessary assessments before drilling can be safely resumed. The Company will release further relevant information as it becomes available,” IOG said.

Andrew Hockey, CEO of IOG, commented: “Needless to say, we will be taking all necessary actions to minimize the interruption to safe and efficient development drilling at Southwark caused by this unexpected issue identified by the Noble Hans Deul rig during jacking operations. Most importantly, there has been no harm to any personnel or any IOG assets. In the meantime, this has no bearing on the timing of Phase 1 First Gas from the Blythe and Elgood fields which remains on schedule to occur during Q4 2021.”

IOG said that it continues to expect First Gas from both the Blythe and Elgood fields in Q4 2021 once the final subsea and onshore installations are complete.