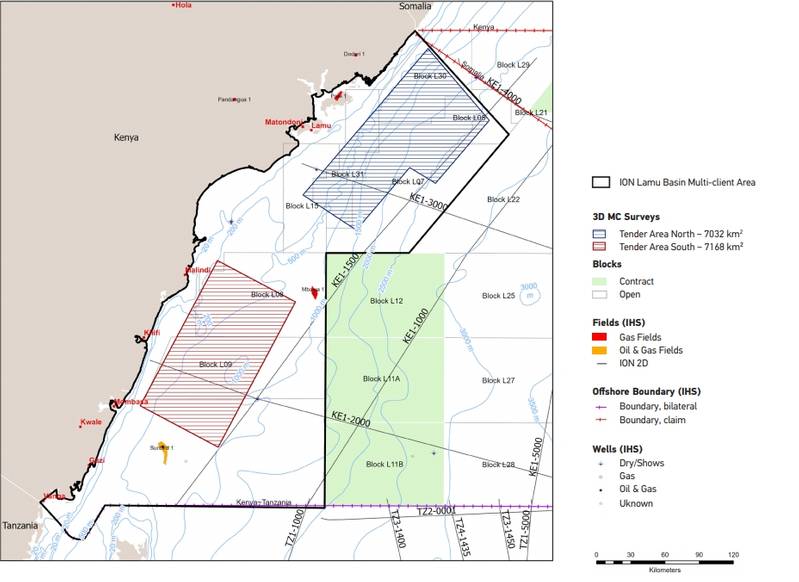 Marine seismic data company ION Geophysical has said it has secured an exclusive agreement for 3D multi-client programs offshore Kenya, an underexplored province that has yet to produce its first offshore oil.

The agreement includes both 3D new acquisition offshore the Lamu Basin and reimaging vintage data offshore Kenya. Subject to industry interest, the survey will be acquired in two phases, in partnership with BGP, covering the northern and the southern edges of the basin

“Offshore Kenya is an attractive area with a proven petroleum system; however, it has remained underexplored, in part due to lack of available 3D data. The final shape and size of new 3D programs will be dictated by client input and underwriting,” ION Geophysical said.

“We are pleased Kenya’s Ministry of Energy and Petroleum selected ION to increase the understanding and promote the hydrocarbon potential of these offshore resources to attract future investment,” said Joe Gagliardi, Senior Vice President of ION’s Ventures group.

“The program will leverage our extensive data library and knowledge offshore Kenya and East Africa. In an increasingly competitive environment for seismic data, we have geographic exclusivity in a promising, underexploited geography to execute our 3D strategy, for both new acquisition and reimaging programs. Kenya represents a fourth significant opportunity to diversify our successful 3D reimaging, in addition to Mexico, Brazil and Mauritania.”

According to info on ION’s website, Kenya is expected to hold an offshore license round in the near term.

“Once complete, the enhanced seismic data will be the most modern data available in the region in support of the round. Though yet to commercially produce hydrocarbon, offshore Kenya is a proven hydrocarbon basin and the new 3D, integrated with ION’s existing 2D coverage in the region, is best suited to realizing potential new discoveries and prospects,” ION’s Kenya survey brochure reads.