Posted by tesla@jabvertising.com on June 22, 2022 | Featured 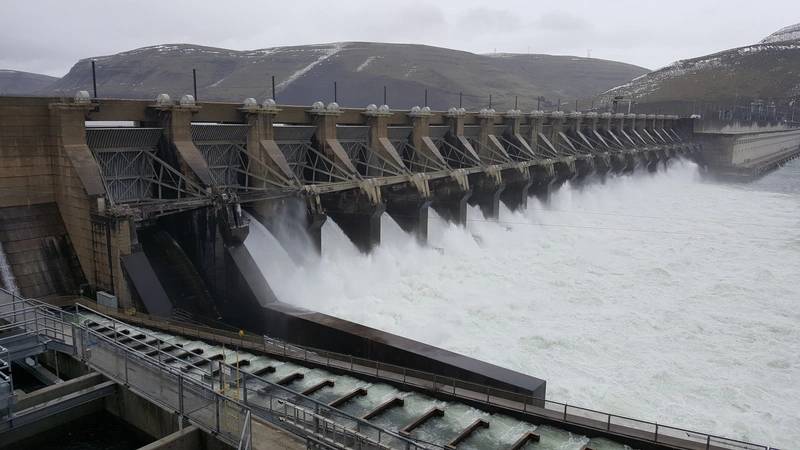 Federal water managers are changing release and storage schedules at several Pacific Northwest dams because of a late season and strong atmospheric river that began June 9. Significant amounts of rainfall have fallen across the Columbia River Basin filling reservoirs and rivers.

To assist in managing river stages at Vancouver, Wash., the U.S. Army Corps of Engineers, Northwestern Division, is increasing storage behind the John Day Dam in Eastern Oregon. Where most dams on the Columbia and lower Snake rivers are “run of river” projects, John Day provides for some storage capacity to aid in reducing flooding in the lower Columbia River.

USACE will manage the reservoir up to elevation 268 feet by June 16. This may impact shoreline trails and parks along the John Day reservoir shoreline. Current flood risk management operations are limiting outflows at John Day Dam to 450,000 cubic feet per second which is expected to keep the Columbia River at Vancouver just at flood stage. Forecasted river stages at Vancouver are ranging from 16 to 16.5 feet.

“The main band of precipitation associated with the system has moved eastward and we saw smaller precipitation amounts yesterday. This precipitation has fallen on our mountain snowpack which has added even more water into our river systems,” said Steve Barton, chief of USACE’s Columbia Basin Water Management Division. “Rain will re-intensify again on Sunday, as the region remains under the influence of multiple shortwave trough systems. Monday will see heavy precipitation in the northeastern headwaters.”

Flows in the lower Columbia below Bonneville Dam are about 450,000 cfs and the stage at Vancouver is over 15 feet — less than a foot from minor flood stage — and will remain there over the next several days with the Vancouver stage expected to peak at 16 feet on June 13, according to the National Weather Service, and remain at flood stage for the next several days based on the latest forecasts and model simulations.

Reservoirs in the Columbia Basin are being operated to release sufficient water to preserve storage space and capture incoming runoff. There are currently no control points downstream of USACE projects that are forecast to exceed flood stage, although several points throughout the basin will reach flood stage, Barton added.

“Of primary concern to us at this point is public safety,” he said. “This system of dams was built primarily to protect the public from catastrophic floods. While we cannot prevent all flooding, we can take steps to minimize the impacts of these powerful weather events.”

Higher-than-expected inflows into Montana and Idaho’s Pend Oreille Basin has prompted additional coordination between the Bureau of Reclamation, Energy Keepers and USACE to balance the remaining storage and flows downstream. With additional precipitation on the horizon, available storage is being managed carefully to preserve space for future rain events.

In Idaho’s Clearwater Watershed, USACE’s Walla Walla District is managing flows from Dworshak Dam to maximize storage options while minimizing downstream impacts due to increased releases. Flows into the lower Snake River are expected to be high for the next week.

USACE staff will continue to monitor conditions and coordinate with regional water managers and the National Weather Service. Once Snake River flows begin decreasing, John Day will begin releasing the stored water and return the reservoir to its minimum irrigation pool.