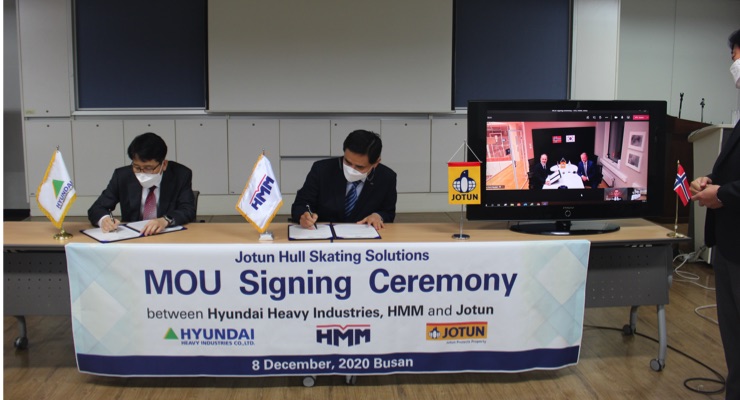 Three global shipping leaders have united to sign an MOU in a push for cleaner, more efficient and greener vessel hull performance.

Hyundai Heavy Industries (HHI), which controls about 10% of the global newbuild market, reached an agreement with HMM Co., Ltd and Jotun to utilize Jotun’s Hull Skating Solutions (HSS) on a series of newbuilds.

Jotun launched HSS to the market earlier this year.

“The combination is ideally suited to vessels facing the most challenging biofouling conditions,” said Geir Axel Oftedahl, business development director, Jotun. “In that respect, it is perfect for protecting newbuilds at outfitting and trial stages.”

“HSS cleans hulls before biofouling takes hold, eliminating associated drag and fuel consumption and emissions while protecting the vessel coatings, and safeguarding ecosystems from the potentially invasive species that look to populate them,” he added. “Biofouling is a particular problem when vessels are idle for long periods, such as during outfitting, and this can cause major issues when trialing initial performance before delivery.”

The HullSkater will move from hull to hull during key outfitting stages.