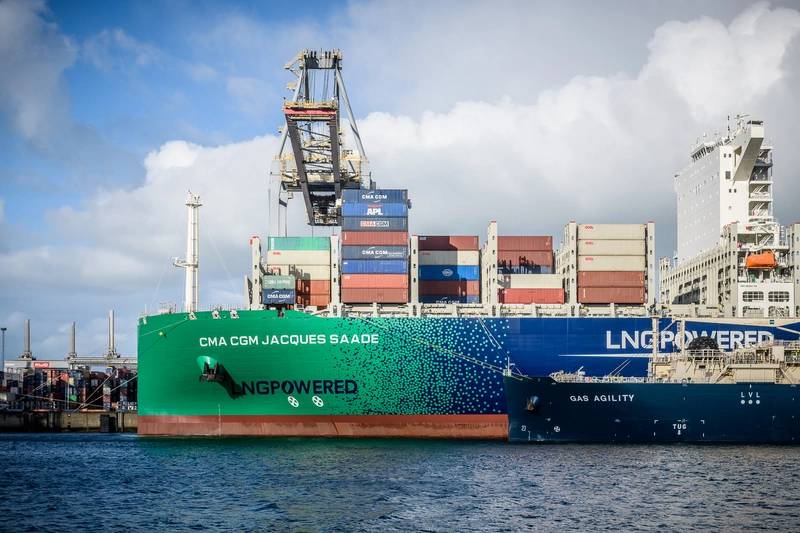 The world’s largest LNG-powered containership, the CMA CGM Jacques Saadé, has completed its first LNG bunkering with Total’s LNG bunker vessel, the Gas Agility, at the Port of Rotterdam in the Netherlands.

The 23,000 TEU containership received around 17,300 m3 of LNG, making it the largest LNG bunkering operation to ever take place, both Total and CMA CGM said Monday.

The bunkering operation was performed by the Gas Agility at the Rotterdam World Gateway terminal by means of a ship-to-ship transfer, while the CMA CGM Jacques Saadé carried out cargo operations simultaneously. Refueling took approximately 24 hours to complete.

As part of the operation, the carbon footprint of the LNG delivered was further reduced with the introduction of biomethane for approximately 13% of the quantity delivered, through the Guarantee of Origin (GO) certificates mechanism. The biomethane is produced in the Schipol area in the Netherlands, mainly by organic municipal waste

“We are really proud of this landmark achievement, which is the culmination of a 3-year close collaboration between Total and CMA CGM,” said Jérôme Leprince-Ringuet, Vice President Marine Fuels at Total. “It also marks the shipping industry’s first commercial use of biomethane on this scale. Such introduction reflects Total’s ambition to get to Net Zero by 2050 and our commitment to help reduce the carbon intensity of the energy products used by our customers.”

“The success of the first LNG bunkering of our flagship in Rotterdam is the culmination of 7 years of research and development by experts from CMA CGM Group and its partners. We are very pleased to have chosen Total for the gas supply of this major industrial project” said Christine Cabau, Executive Vice President in charge of CMA CGM Group’s industrial assets. “This operation marks the structuring of a chain of excellence for LNG used as a fuel for maritime transport. It is a new step towards accelerating the energy transition in maritime transport and logistics”.

“The pioneering bunkering operation is a ground-breaking development for the global LNG market and concretely demonstrates Total and CMA CGM’s pledge to advance the use of LNG as a marine fuel, the best, immediately available solution in terms of energy transition to help reduce the environmental footprint of maritime transport. LNG makes it possible to eliminate almost all the air pollutants generated by the combustion of fossil fuels,” the two companies said.

The bunkering operation was completed on November 13. AIS data shows that the vessel, named after the founder of CMA CGM who passed away in 2018, has departed Rotterdam and is now on its way to Southampton, UK.