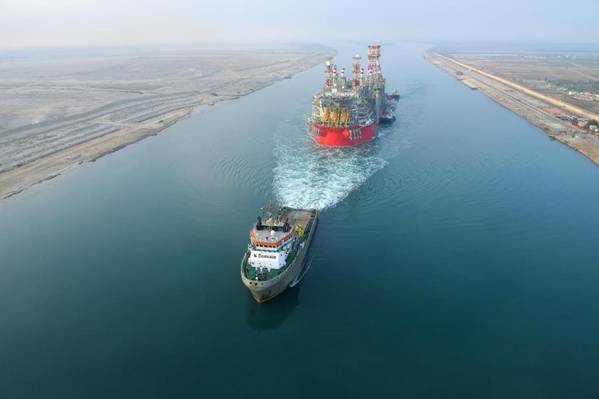 The head of Lebanon’s Hezbollah said on Thursday that his group could stop Israel from extracting gas from a maritime field that Beirut says lies in disputed waters, adding Hezbollah is “not afraid of war.”

Lebanon warned Israel on Sunday against any “aggressive action” in disputed waters where both states hope to develop offshore energy, after a vessel operated by London-based Energean arrived off the coast to produce gas for Israel.

Hezbollah “has the capacity to prevent the enemy from beginning to extract from Karish, and all the enemy’s actions will not be able to protect this ship,” Hezbollah chief Sayyed Hassan Nasrallah said in a televised speech.

Nasrallah said that “the Greek company,” referring to Energean, “is a partner in this attack on Lebanon,” for which it will face “consequences.”
Energean declined to comment on Nasrallah’s remarks about the Karish gas field.

Energean has said that its floating production storage and offloading vessel [Energean Power FPSO] is due to start production at Karish in the third quarter.

Israel says that the field in question, which is about 80 km (50 miles) west of the city of Haifa, is within its exclusive economic zone, not in disputed waters.

The United States began mediating indirect talks between the sides in 2000 to settle a long-running dispute that has obstructed energy exploration in the eastern Mediterranean.

Lebanon has yet to respond to an undisclosed proposal a U.S. envoy made early this year to revive the stalled talks.

Lebanese parliament speaker Nabih Berri said on Tuesday that U.S. mediator Amos Hochstein will visit Beirut early next week but Washington has said there are no travel plans to announce yet.