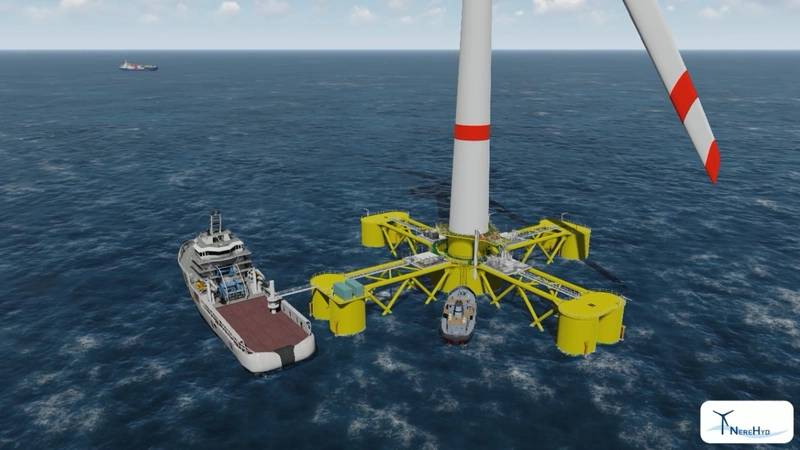 Lhyfe and DORIS plan to launch the first floating wind turbine for integration with a hydrogen production system and identify larger-scale opportunities for their solutions.

The signing of the MoU by the two companies comes just several weeks after Lhyfe’s Bouin production site in Vendée began producing the first few hundreds of kilos a day of carbon-free green hydrogen.

“The operational knowledge gained from this world-first will be employed to finalize the development of DORIS’ and Lhyfe’s proprietary solution Nerehyd,” the two companies said.

“This exclusive product combines Lhyfe’s expertise in green renewable hydrogen production with DORIS’ floating wind turbine solution Nerewind The Nerehyd solution, which incorporates a hydrogen production facility into the floater of a wind turbine, could be deployed for on-grid or off-grid applications, from small-scale 10-megawatt wind turbines to large-scale wind farms with several hundred megawatts of capacity,” the companies said.

According to a press statement released Monday, the budget for the project – including R&D and the production of the first prototype, due in 2025 – will be in the region of 60 million euros.

The objectives of the two partners are to: Finalize the solution’s design; Overcome the main technical and economic obstacles; Develop and finance a pilot project; Identify target projects for industrial-scale deployment.

Xavier Grandiaud, Executive Deputy Managing Director of DORIS Engineering said: “While we have no doubts that producing green hydrogen on land will be the first step in large-scale global development, we deeply believe in the need to move rapidly offshore to meet the strong demand ahead, which will require a massive amount of electricity.

“With Lhyfe, we believe that offshore production will be the best way to successfully produce large amounts of green hydrogen without impacting terrestrial landscapes or relying on an existing grid connection. Our NerehydTM solution is the perfect tool for large-scale, sustainable and economically viable green hydrogen production. With Lhyfe, we now have all the keys in hand to make Nerehyd a success.”

Matthieu Guesné, CEO and founder of Lhyfe added: “We are delighted to be moving forward on our projects with DORIS. At Lhyfe, the reason we located our first production site near the ocean was to start producing in offshore conditions, because from day one we have been certain of one thing: offshore is the key to the massive development of renewable hydrogen. We are starting to see more and more offshore wind farms and traditional players are keen to find ways to scale-up their infrastructures and solutions. We are therefore very optimistic about the development of this sector and are working to offer a range of solutions to adapt to each situation”.

In addition to the joint development of Nerehyd, which is the partnership’s core focus, Lhyfe and DORIS will also be studying the possibility of extending the collaboration to other types of offshore hydrogen production solutions.