Posted by tesla@jabvertising.com on June 15, 2022 | Featured 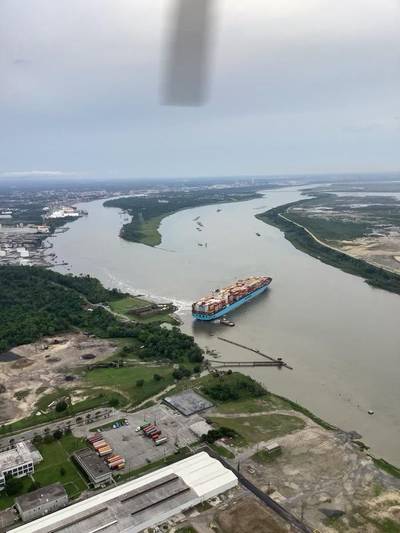 The 1,091-foot Maersk Surabaya ran aground in the Savannah River, June 14, 2022. The ship was refloated with no reported injuries or pollution. (Photo: David Micallef / U.S. Coast Guard)

A Maersk containership has been refloated after running aground in the Savannah River near Fort Jackson on Tuesday.

The U.S. Coast Guard said it was notified at 6:09 p.m. via the vessel agent of Maersk Surabaya that the vessel had run aground.

The 1,091-foot box ship was repositioned to the center of the shipping channel with the help of seven tugs. AIS ship tracking data shows the vessel was aground for about 2 hours.

The Danish-flagged vessel is now safely moored, and no injuries or pollution have been reported.

The Coast Guard and port pilots temporarily closed the waterway, though the Coast Guard said the event did not impact commercial traffic.

Last year, the same vessel caused approximately $1.5 million damage when it dragged its anchor through a protected zone and snagged a subsea communications cable off the coast of West Australian. The vessel’s master, a Ukrainian national, was arrested and charged in Australia over the incident.