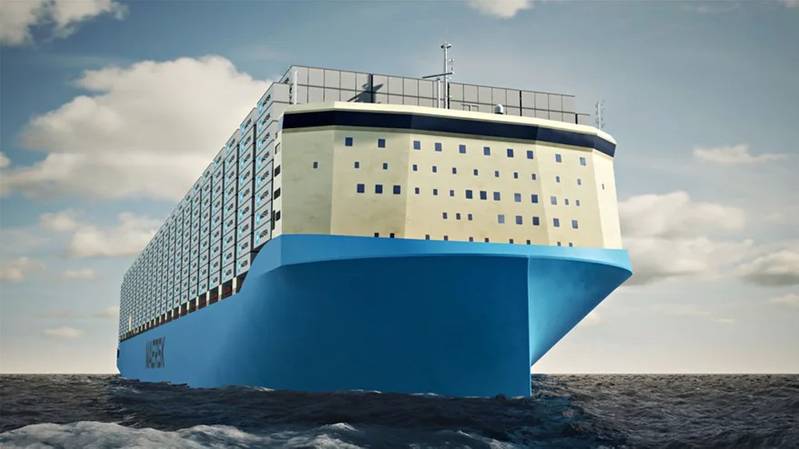 The groundbreaking vessels, ordered in August 2021 from South Korea’s Hyundai Heavy Industries for expected delivery by early 2024, will feature an innovative dual-fuel engine setup that can operate on methanol and conventional low-sulphur fuel. With 16,000-cubic-meter tanks for green methanol, the vessels will be able to complete an entire round-trip, for example Asia-Europe, on the cleaner-burning fuel, Maersk said.

The Danish shipping giant, which has pledged to only order new vessels that can use carbon-neutral fuel as it strives for net-zero emissions by 2050, has said that the majority of its largest customers had set or were in the process of setting targets to cut emissions across their supply chains. Maersk’s towage arm Svitzer is also working to develop methanol-fueled tugs.

“When designing these [new containerships], our ambition was to make sure the new vessels could service our customers in a smarter way while contributing to their carbon-neutral transportation goals,” A.P. Moller – Maersk’s chief technical officer, Palle Laursen, said in a post revealing the new design.

“Unique to the industry, this design allows a 20% improved energy efficiency per transported container, when comparing to the industry average for vessels in this size,” Laursen said. “Additionally, the entire series is expected to save around one million tons of annual CO2 emissions, offering our customers carbon-neutral transportation at scale on ocean trades.”

The 350-meter-long, 53.5-meter-wide ships will be built to ABS class and have a much different look compared to typical large container vessels. The crew accommodation and bridge will be located at the bow while the funnel will be placed to one side in the aft, both creating extra space for increased container capacity.

“To enable this new design, several challenges had to be addressed,” Laursen said. “Firstly, crew comfort had to be ensured with the accommodation placed in this more exposed location. Moreover, adequate hull strength was also a key parameter to safeguard, with the accommodation block normally working as a hull ‘stiffener’ when placed further backwards. New arrangements for lifeboats and navigational lights had to be developed, plus new cameras to support the captain’s view when navigating.”

With a reported sticker price of about $175 million each, the new vessels will cost about 10-15% more than traditional containerships, and the methanol fuel is significantly costlier than conventional bunker fuel.

Morten Bo Christiansen, Maersk’s head of decarbonization, told Reuters earlier this year that Maersk would carry the costlier vessels on its balance sheets, but the additional fuel cost would be shared with customers. “It’s actually not that much more expensive, because even if we double our fuel cost, the impact on a pair of sneakers is less than five cents,” he said.