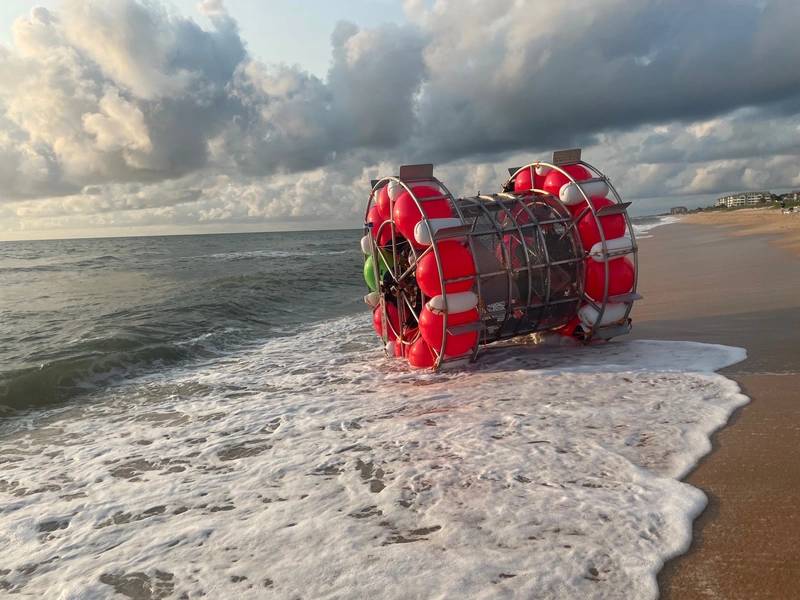 A  man in a hamster wheel-like vessel washed ashore near the Old Salt Park beach approach in Flagler County, Florida. He said he was on the way to New York.

“[The vessel’s] sole occupant was with the vessel and advised that he came to shore because he was missing some of his equipment,” Flagler Sheriff’s report from July 24 reads.

In a tweet on Saturday, Flagler Sheriff said the occupant of the vessel was safe with no injuries.

“The occupant advised he left the St. Augustine area [the day before] to head to [New York], but came across some complications that brought him back to shore,” Flagler Sheriff tweeted.

St. Augustine is a city on the northeast coast of Florida.

The U.S. Coast Guard was contacted and arrived on scene to take over the case and ensure the vessel/occupant are USCG compliant for their safety moving forward, Flagler Sheriff tweeted.

Unfortunately, Google doesn’t offer an option to calculate the St. Augustine-New York ETA when one is using a hamster-wheel-like contraption.

Also, according to Google Maps, the device was floating away from New York direction, as the location where it washed ashore is south of S. Augustine.

The Guardian reported Monday that the man behind the attempt was Reza Baluchi. His website, runwithreza.com describes him as an ultra-marathon runner.

Media reports found online claim that he tried to reach Bermuda at least three times, but these attempts were apparently stopped by the U.S. Coast Guard. See below: