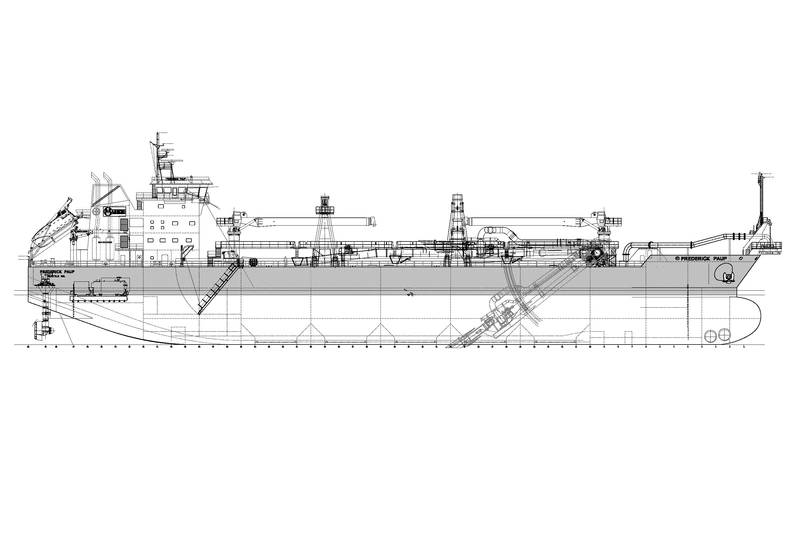 Manson Construction Co. signed a contract with Keppel AmFELS to build a new hopper dredge at the shipbuilder’s facility in Brownsville, Texas, the Seattle-based marine contractor announced Monday. The new dredge is scheduled to be fully operational by spring 2023 and continues a dredge building boom currently underway in the U.S.

The self-propelled hopper dredge Frederick Paup will be the largest in the United States, representing Manson’s single biggest investment in its 115 year history, the company said. The 15,000 cubic yard hopper dredge — designed in collaboration with Hockema Whalen Myers Associates, Inc. of Seattle — has a length of 420 feet, breadth of 81 feet and draft of 28.5 feet.

Manson said a U.S. Bank-led syndication is providing financing for the dredge, which will be named after Manson’s chairman of the board, Frederick Paup.

“We are proud that it will be U.S. built, U.S. flagged, and U.S. crewed, and will support the U.S. Army Corps of Engineers’ mission of keeping the marine transportation highway open throughout the United States,” Paup said. “This dredge is the culmination of years of work by our dedicated team and I am honored to bear its name.”

Mohamed Sahlan Bin Salleh, president of Keppel AmFELS, said the Jones Act newbuild project is its first for Manson and that it will be supported by its local workforce and suppliers across the U.S.

A number of new dredgers are currently being built at shipyards across the United States, including hopper dredges for Great Lakes Dredge and Dock and Weeks Marine under construction at Conrad Shipyard and Eastern Shipbuilding Group respectively. Cutter suction dredges are also being built for Mike Hooks and Callan Marine at Mobile Pulley Works and Halimar Shipyard respectively, and Royal IHC said it will build a new dredge for the North Carolina State Ports Authority at an unnamed U.S. shipyard.