Christopher Glynn had known for some time that he wanted to build all-electric vessels for his Niagara Falls tour boat company Maid of the Mist. In January 2018 he decided in earnest that he was going to make it happen.

But where to begin? Fully electric ferries had never been built in North America, so Maid of the Mist would be plying uncharted waters. Glynn, the company’s president, said he and his team started by doing their research—a lot of research—and by hiring a team of consultants to help weigh their options.

Inspired by the world’s first all-electric ferry, Norled’s Ampere in Norway, Glynn knew his team could bring the innovative and emissions-free technology stateside. “We were very excited and intrigued by the opportunity,” Glynn said. “We knew it wasn’t going to be easy, but it could be done.”

And so began the pioneering journey to design, build and commission America’s first newbuild all-electric passenger vessels, James V. Glynn and Nikola Tesla. The first-of-their-kind vessels entered service in October, each with capacity to carry up to 600 passengers to experience one of North America’s most well-known natural attractions. Notably, the vessels are all-electric, not hybrid, meaning there’s none of the exhaust fumes, engine noise or vibrations associated with diesel engines, Glynn said.

In addition to their environmental credentials, the manner by which these vessels were built also makes them quite unique. The 90.5-foot aluminum catamaran vessels were designed by John Koopman, president of Propulsion Data Services, and constructed modularly at Burger Boat Company in Manitowoc, Wis. Each section was trucked to Niagara Falls where the modules were lowered by crane into the gorge and pieced together at Maid of the Mist’s facility where they were also outfitted.

“It can’t be overstated how difficult it was to get the boats assembled down in the gorge,” Glynn said, adding that the U.S. Coast Guard approval process, which he described as “rigorous, and rightly so”, posed additional challenges. Glynn said Micah Tucker of Tucker Yacht Design was instrumental in helping Maid of the Mist to navigate this hurdle and other aspects of the project. 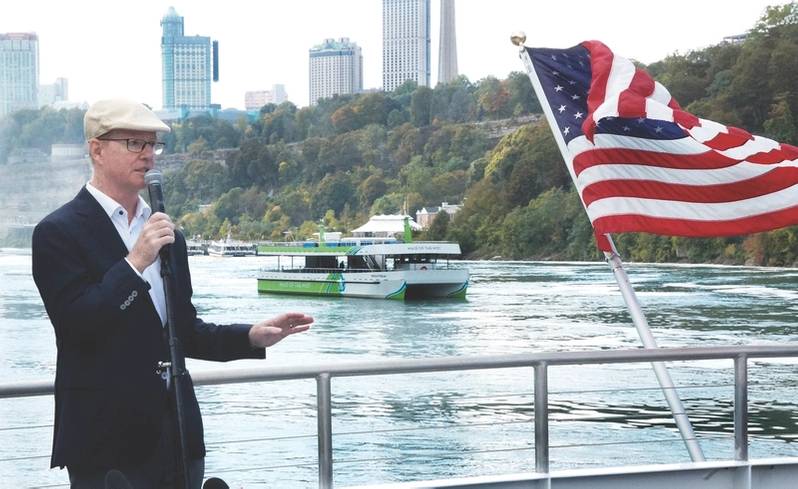 Ed Schwarz, ABB’s vice president of sales, newbuilds, said the operational profile of the Maid of the Mist vessels—frequent and relatively short trips and docking times—is particularly well suited for all-electric propulsion. “We were able to fit enough battery power and have a completely redundant system that freed the vessels from having to have engines on board,” he explained.

The vessels, which run trips that are typically about 20 minutes long, are charged using locally produced hydroelectricity, ensuring that the energy cycle for the operation of the Maid of the Mist ferries is entirely emissions-free. “It’s an ideal state that’s not always possible, but when it is, it’s really a home run,” Schwarz said.

The vessels draw additional benefits from the thrusters, said Tim Batten, vice president, sales at Veth’s parent company, Twin Disc: “Having azimuth thrusters allows the Maid of the Mist vessels to have great maneuverability so that the captain can get passengers close to the sights of Niagara Falls.”

Batten said the L-drives also increase efficiency, help to save onboard space and give passengers a more exclusive experience to take in the sounds of the towering falls. “Both thrusters are completely isolated from the aluminum hull with a resilient mounted thruster suspension in order to reduce noise and vibration transferred to the hull. The prime movers are permanent magnet motors connected directly to the azimuth thrusters, and L-drives are a good fit for this application because it has one less gear set than a Z-drive, so it is more efficient due to lower gear transmission losses,” he said. 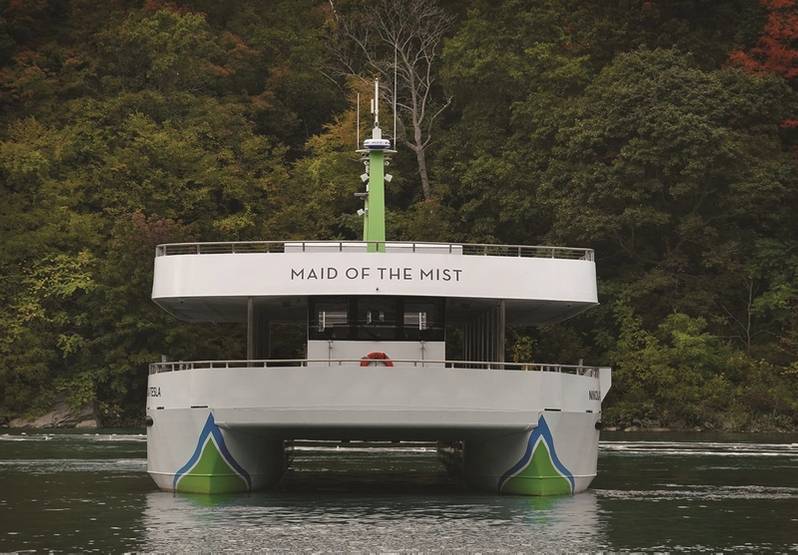 (Photo: Maid of the Mist)