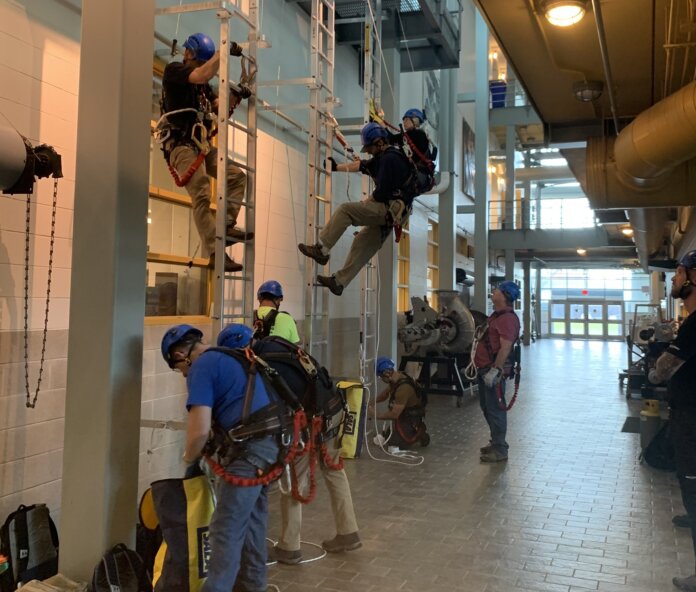 The Massachusetts Maritime Academy (MMA) says it is helping prepare the workforce for clean energy opportunities that are coming to the region, delivering key training for personnel who will build the wind farms that will power the Northeast region.

In 2018, MMA received funding from the Massachusetts Clean Energy Center to build its GWO Training Center at the academy’s Maritime Center for Responsible Energy. The GWO Training Center consists of a waterfront crew transfer training facility, a 25-foot crew transfer training vessel, and a working-at-heights training facility. At the end of 2019, MMA, in cooperation with RelyOn Nutec, began offering the GWO Basic Safety Training (BST) at its Buzzards Bay campus, offering all five modules of GWO BST for Offshore Wind.

The GWO BST course, developed by RelyOn Nutec, consists of five modules: Working at Heights, First Aid, Fire Awareness, Manual Handling, and Sea Survival. The modules are taught by MMA instructors whose goal is to have participants gain an awareness of the hazards encountered when working in the wind industry and how to control and mitigate against those hazards.

Members of Pile Drivers and Divers Local 56, the marine construction local of the North Atlantic States Carpenters Union, are taking advantage of the course. The Massachusetts Clean Energy Center is sponsoring Local 56 members’ participation with a $100,000 Workforce Development Grant. The North Atlantic States Carpenters Training Fund has co-sponsored  training with an addition $50,000. So far, 39 members have graduated from the course, including three at the instructor level, and an additional 24 individuals are scheduled to participate in October and November.