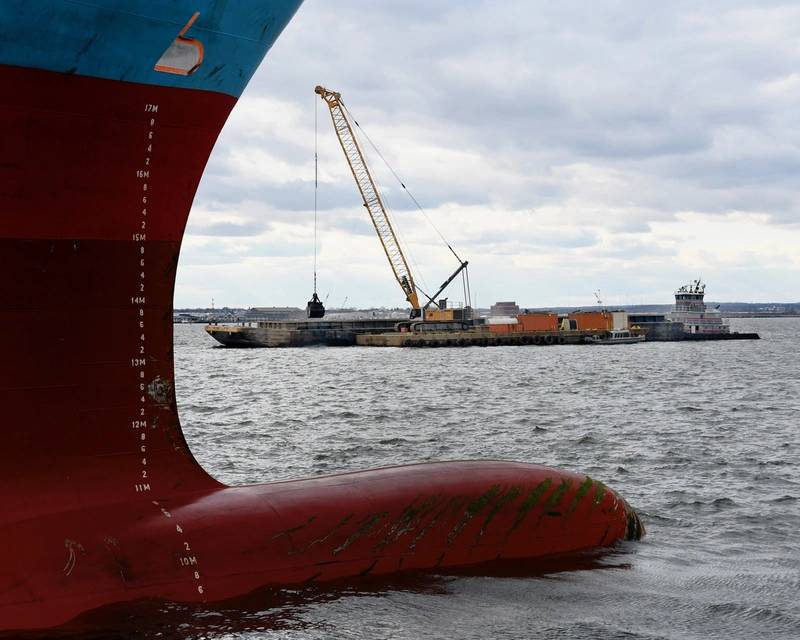 The Maryland Department of Transportation Maryland Port Administration (MDOT MPA) and the U.S. Army Corps of Engineers (USACE) are marking a milestone of environmental stewardship this month on the landmark restoration of Poplar Island near Talbot County. Simultaneously, the agencies are advancing plans for their next partnership using dredged materials to preserve and protect Maryland’s waterways: the Mid-Chesapeake Bay Island Ecosystem Restoration.

Since 1998, Poplar Island has been Maryland’s primary site for reuse of sediment dredged from shipping channels leading to the Helen Delich Bentley Port of Baltimore. Construction for the island’s final expansion, adding four new wetland cells and one upland cell, was completed January 20. The expansion adds 575 acres and capacity for 28 million cubic yards of material.

While the island will continue receiving dredge sediment until 2032, MDOT MPA and the USACE are now working on pre-construction engineering and design for the Mid-Chesapeake Bay Island Ecosystem Restoration, which will rebuild James and Barren islands near Dorchester County and eventually replace Poplar Island as the state’s primary receiving site for bay channel dredged sediment.

“The Maryland Port Administration is known for its innovative use of dredged material to restore land and create environmental assets,” said Governor Larry Hogan. “Dredging is necessary for the Port of Baltimore to accommodate the huge ships that deliver cargo and grow our economy. The legacy of Poplar Island shows we can support both commerce and the environment if we embrace innovation and work together.”

Poplar Island is also known as the Paul S. Sarbanes Poplar Island Environmental Restoration Project in recognition of the late U.S. senator from Maryland for his advocacy of legislation that created it. Once dwindled to less than 10 acres due to erosion, the island has been rebuilt it to its original 1,150-acre footprint through the MDOT MPA and USACE partnership. The Poplar Island restoration is internationally recognized, and today the island is home to hundreds of species of wildlife and waterfowl.

“The completion of the Poplar Island Ecosystem Restoration Project represents a tremendous step forward in our long-running effort to protect the health of the Chesapeake Bay and support continued economic growth at the Port of Baltimore,” said U.S. Congressman John Sarbanes, who represents Baltimore in the U.S. House of Representatives and serves as Co-Chair of the Chesapeake Bay Watershed Task Force. “For many years, my father, Senator Paul Sarbanes, worked to secure the federal funding required for this important project and to bring together stakeholders from across Maryland and in Washington to help revive Poplar Island.

“I want to salute our federal, state and local partners – including the Baltimore District of the U.S. Army Corps of Engineers, the Maryland Department of Transportation and the Maryland Port Administration – for bringing this innovative engineering feat across the finish line,” Congressman Sarbanes added.

“The Poplar Island restoration project has been nothing short of transformational, both for the Chesapeake Bay and the ecosystems that it supports,” said U.S. Senator Ben Cardin. “While the newly created bird, fish and reptile habitat are impressive, the sheer scale of the project is likely most inspiring. The partners working on Poplar Island’s restoration have demonstrated, beyond any shadow of doubt, that ecosystem-scale restoration projects are indeed possible in the Chesapeake Bay and that dredged material can serve as an environmentally beneficial resource and not only a byproduct for disposal.”

Next stop: Mid-Chesapeake Bay
“Based on this success, I look forward to continuing to work to enable future solid investments in ecosystem-level transformation efforts,” Sen. Cardin added. “Team Maryland’s next major push will center on the fast-disappearing James and Barren islands, which will be the focal points of the equally ambitious Mid-Chesapeake Bay Island Ecosystem Restoration Project. We will advocate strongly for federal funding for the construction of this important project.”

For fiscal year 2021, the USACE’s Baltimore District has been allocated $382,000 in its Corps of Engineers Work Plan to work with MDOT MPA on pre-construction engineering and design for the Mid-Chesapeake Bay Island Ecosystem Restoration. The project will rebuild two barrier islands – James and Barren – creating new habitat and providing much-needed shoreline protection in Dorchester County. The larger of the two, James Island, will have 2,072 acres restored, with 55% preserved as wetlands habitat and 45% as upland habitat. At Barren Island, 72 acres will be restored as wetlands.

“Completing the Poplar Island project is a huge win for Baltimore’s economy, our local businesses, and our environment,” said U.S. Senator Chris Van Hollen. “Together with Senator Cardin, I’ve fought for this critical investment, and its completion will help ensure the Port of Baltimore can thrive and bring new jobs to the region. In addition to this construction project, the Army Corps’ 2021 Work Plan charts a path forward on a number of other related Maryland priorities, including the Mid-Chesapeake Bay Island Ecosystem Restoration Project, to rebuild the James and Barren islands. I will continue to work on the Appropriations Committee and with Team Maryland to fund our Army Corps’ needs for the good of our state and our coastal communities.”

Pending permits, restoration at Barren Island could begin in 2022, with James Island following in 2024. James Island will accommodate an estimated 90 million to 95 million cubic yards of dredged sediment, providing at least 30 years of capacity. Barren will accept sediment from nearby shallow-draft channels. USACE will turn the project over to the state when the habitat development is complete.

“Our experience working with the Army Corps of Engineers at Poplar Island gives us great optimism for what we can accomplish together at Mid-Chesapeake Bay,” MDOT Secretary Greg Slater said. “This restoration will rebuild two vanishing islands and help protect Maryland’s critical shorelines. It also demonstrates, yet again, how dredged material can be a valuable resource to support the Bay environment and the men and women working at the Port.”

Funding for Mid-Chesapeake Bay’s planning and design is part of an overall $28 million for the Port of Baltimore through the 2021 Work Plan for the Army Civil Works Program. The program includes funds for planning, design, construction, operation and maintenance of water resource projects with a focus on three main mission areas: commercial navigation, flood and storm damage reduction, and aquatic ecosystem restoration. It also funds programs that contribute to protection of waters and wetlands.

In addition to the $382,000 for the Mid-Chesapeake Bay Island Ecosystem Restoration Project, highlights of the Corps of Engineers Work Plan for the Port of Baltimore include:

The Corps Work Plan allows the USACE Baltimore District to maximize dredging for Baltimore’s harbor and approach channels. In addition to providing 425,000 cubic yards of material that will continue the restoration at Poplar Island, the work plan includes funding to maintain maximum depth for the approach channel at the mouth of the Chesapeake Bay where ultra-sized, Neo-Panamax vessels enter on their way to the Port of Baltimore.

MDOT MPA’s public-private partnership (P3) with Ports America Chesapeake has fostered development of the infrastructure that allows the Port to greet and service some of the largest container vessels in the world. As that partnership continues, construction of a second, 50-foot deep berth at the Seagirt Marine Terminal is moving forward. The additional berth will allow the Port to handle two supersized ships simultaneously. Four new additional Neo-Panamax cranes are scheduled to arrive in April 2021 and be operational by summer.

The growing container business also accentuates the need for the Howard Street Tunnel expansion project in Baltimore, which will accommodate double-stacked rail cars to move cargo from the Port. That project is benefitting from public-private investment between the federal government, the state of Maryland, CSX and others

The Port of Baltimore generates about 15,300 direct jobs, with nearly 140,000 jobs overall linked to Port activities. In 2019 the Port handled a record 43.6 million tons of cargo, including more than 11 million tons of general cargo at the state-owned, public terminals. The Port ranks first among the nation’s ports for volume of autos and light trucks, roll on/roll off heavy farm and construction machinery, and imported gypsum. It ranks 11th among major U.S. ports for foreign cargo and ninth for total foreign cargo value.