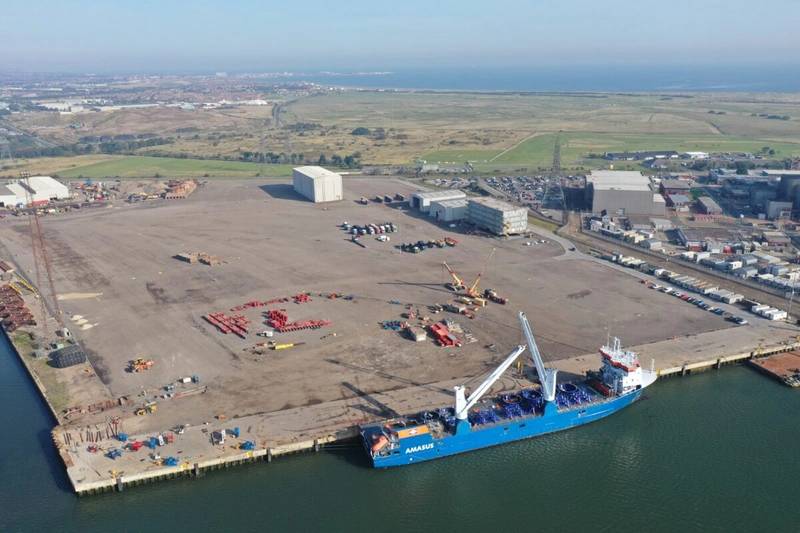 “MHI Vestas has moved in to Able Seaton Port (ASP) in Hartlepool ready to install 90 of its V164-9.5 MW turbines at the Triton Knoll project in Q1 2021,” the company said this week.

To remind, RWE, the operator of the 857 MW Triton Knoll offshore wind farm in August said that it had completed the installation of all 90 turbine foundations and two 50-kilometer long export cables connecting offshore and onshore electrical systems at its Triton Knoll offshore wind farm site, 32km off the coast of Lincolnshire in the UK North Sea, paving way for the upcoming installations of wind turbines.

MHI Vestas said that the ASP would serve as the turbine logistics and pre-assembly hub for the project, with components expected to arrive from November 2020.

Turbine tower sections, blades and nacelles will be marshaled and pre-assembled at ASP, before being loaded onto vessels for transport to the wind farm.

Triton Knoll is being built by RWE Renewables in partnership with J-Power and Kansai Electric Power, and is RWE’s most powerful offshore project under construction. The wind farm will be powered by 90 MHI Vestas V164-9.5 MW turbines, which are due to be installed 32km off the Lincolnshire coast beginning in Q1 next year.

Each turbine consists of 80m long blades, which are manufactured at MHI Vestas’ facility on the Isle of Wight, and finished at its Fawley plant across the Solent. The Fawley facility is a decommissioned, oil-fired power plant that has been repurposed into a painting and logistics facility for the 80m-long blades.

“MHI Vestas’ commitment to the UK is demonstrated by the local benefits we have prioritised for the Triton Knoll project,” said MHI Vestas VP and UK Country Manager, Julian Brown. “Able UK’s close collaboration with MHI Vestas to prepare the ASP site for Triton Knoll has made it an easy choice to use this top-class facility. The site covers approximately 140,000 square meters with heavy-duty deep water quays, a vital pre-requisite for a project the scale of Triton Knoll.

MHI Vestas has now begun to prepare the site at ASP  for the impending arrival of turbine components, prioritizing UK companies in the delivery of the project.

“As a result, ASP now hosts technicians on-site from local suppliers, including Global Wind Service (GWS), Dawson and Boston Energy, as well as MHI Vestas employees. The main crane and Self-Propelled Modular Transporter (SPMT) to be used at ASP for moving turbine components will be supplied by Weldex, based out of Alfreton, UK,” MHI Vestas said.