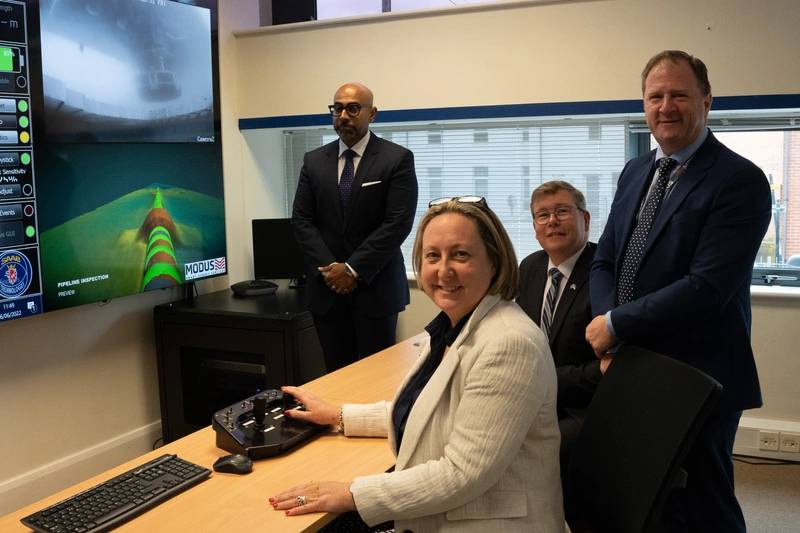 UK-based subsea services company Modus has commissioned its control room in Darlington, England, from which it can operate subsea hybrid autonomous underwater vehicles.

The subsea robotics company said the launch was the culmination of a £24 million (around $29.8 million) investment program.

The company welcomed the Right Honourable Anne-Marie Trevelyan MP, Secretary of State for International Trade and Darlington MP Peter Gibson, to officially open the control center at its headquarters.

According to the company, these HAUVs combine the characteristics of a Remotely Operated Vehicle (ROV), which is linked to the surface, and an Autonomous Underwater Vehicle (AUV), which can operate without such a link. The vehicles can be deployed internationally and operated from the Darlington control room.

The investment includes four HAUV’s, two of which are in service, with the third and fourth to be delivered in October 22 and mid 2023, respectively.

Trevelyan was invited to pilot one of the vehicles around the port of Sunderland via remote connection.

She said: “It’s been fantastic to have the chance to discover the extraordinary work in underwater drone technology that Modus has been leading on. It’s genuinely world-leading, UK-first technology and I’m so proud that it’s here in Darlington

“There’s amazing, brilliant leadership in this sector and Modus is absolutely leading the way. It’s so exciting to hear the opportunities that are coming forward for this technology, and I want to make sure that it’s heard around the world: ‘made in Darlington, sold to the world.’ This is where the new technology started and it will be central to the UK’s leadership in underwater technology in the decades ahead.”