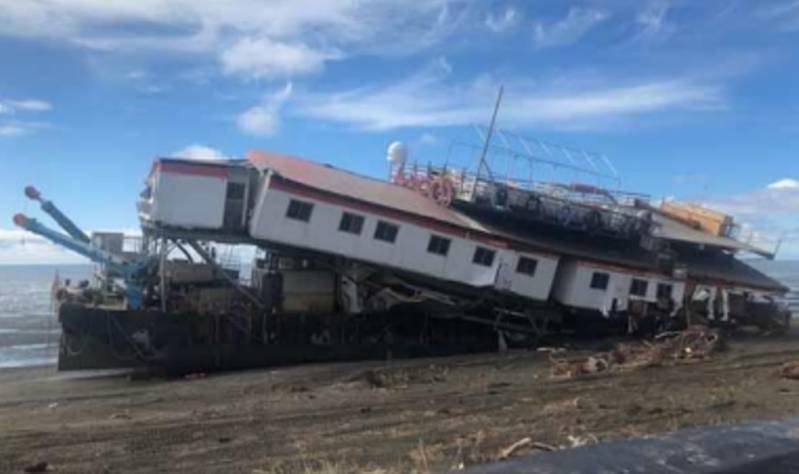 A fatigue crack ultimately led to a fishing tender barge breaking loose from its mooring buoy and grounding during a storm near Ekuk, Alaska, the National Transportation Safety Board (NTSB) said in a recent marine investigation report.

On August 30, 2020, the fishing tender barge SM-3 broke free from the buoy it was anchored to and began drifting. The six-person crew deployed two emergency anchors, but the barge continued to drift and grounded on the beach. No injuries were reported. There was a 3-mile debris field on the beach. The vessel sustained damage estimated at $4.5 million.

The vessel was anchored in Nushagak Bay with its mooring and ground tackle system for the salmon fishing season. During the season, the SM-3 provided tender services and processed fish for fishing boats operating in the area. On August 19, the SM-3 wrapped up the season and began to prepare for winter layup. A storm blew through the area on August 30 with winds estimated at 50 to 60 mph. The storm resulted in forces that exceeded the capability of the mooring buoy, the weakest link in the barge’s ground tackle system. Once freed from the buoy, the barge drifted and eventually settled on a beach. The following morning the crew evacuated the vessel and were picked up by locals.

The NTSB determined the probable cause of the grounding was a fatigue crack in one of the mooring buoy’s padeye welds, which resulted in the padeye separating from the buoy’s spherical steel plating, causing the barge to break free from its buoy and anchors and drift ashore during a storm.

“In addition to fitting mooring chains of sufficient length to provide adequate scope for anchorages, mariners must consider the strength of each component of a ground tackle system and should reference marine standards for design,” the report said. “Bending loads can be significantly higher than straight-line pull. The working load limit of each component should be equal to or greater than the ground tackle system’s maximum calculated load to avoid weak points in the system.”