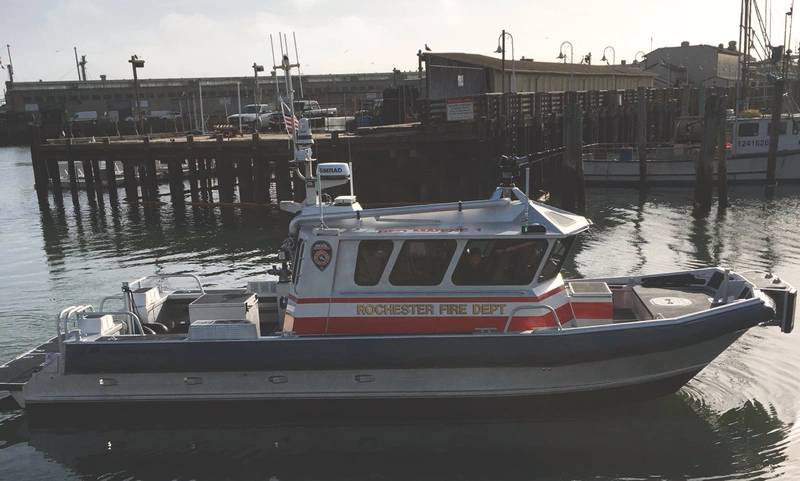 California-based boatbuilder Moose Boats has delivered a new fireboat to the Rochester, N.Y. Fire Department. The M2-38, dubbed Marine 1, is the first Moose in the Great Lakes. With a roof monitor, a cockpit monitor, a 5” large diameter hose Storz discharge, and the ability to pump over 1,500 gallons per minute, this boat will offer greatly increased capabilities to the city and its surrounding communities, the builder said.

Rochester Fire Department’s new boat has an extended walk-around cabin configured with three shock-mitigating crew seats, an incident command/navigation station, an 84″ patient bench with EMS storage below, and an integrated deck level head enclosure. Weather-tight deck boxes on the fore deck and aft deck will house firefighting foam and the additional valves, nozzles, tools and hardware necessary to respond to a wide range of fire and rescue scenarios.

The navigation and electronics suite is comprised of three multifunction navigation screens, radar, 3D side scan sonar, AIS, VHF radios, a radio direction finder and a thermal imaging camera. A heavy-duty push knee enables the M2-38 to come in contact with larger vessels and piers while the combination ladder allows for firefighters to disembark off the bow in beach landing scenarios and facilitate dive and rescue operations from the stern.

The Rochester, New York Fire Department (RFD) has jurisdiction on the Genesee River and Lake Ontario. The Port of Rochester is home to over 1,000 seasonal and transient slips including the City’s new marina, the Rochester Yacht Club, several private marinas, and a cement shipping terminal. The port of Rochester is also a safe harbor of refuge for the main Great Lakes shipping channel that passes in front of the port. According to Rochester Fire Chief Felipe Hernandez Jr., “This vessel will enhance the Rochester Fire Department’s response capabilities in providing for the safety of the residents, businesses and boating community in the Charlotte neighborhood and the nearby waterways.”

Monroe County, in which Rochester resides, has the second largest number of registered boaters in the State of New York. The RFD’s new vessel will work in conjunction with marine resources from U. S. Coast Guard Station Rochester, U. S. Customs and Border Protection, the New York State Department of Environmental Conservation, and the Monroe County Sheriff Marine Unit to protect these assets and respond mutual aid with neighboring marine emergency response agencies along the south shore of Lake Ontario.