Posted by tesla@jabvertising.com on October 4, 2020 | Featured 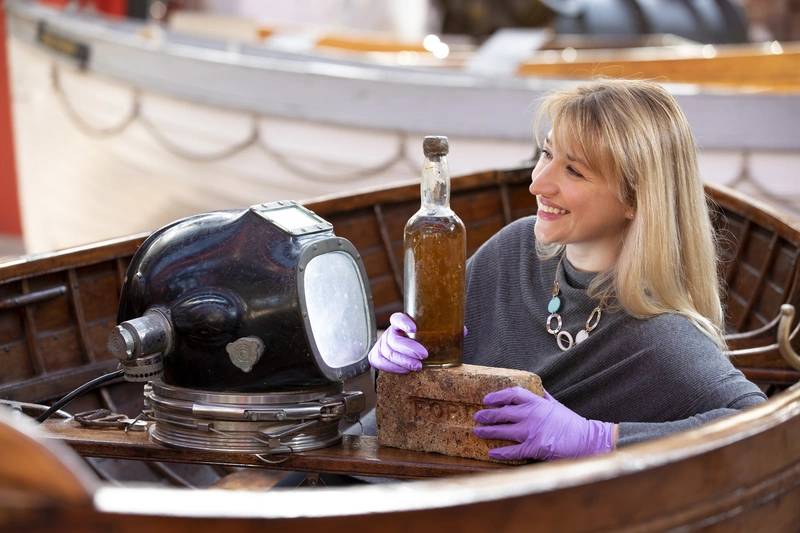 The Scottish Maritime Museum has successfully bid for an 80-year-old bottle of whisky salvaged from one of Scotland’s most famous shipwrecks and the inspiration for the Ealing Studio comedy Whisky Galore!

The unlabelled bottle of blended whisky from the 1923 SS Politician, which ran aground off the Isle of Eriskay in 1941, was acquired by the Scottish Maritime Museum with the support of the National Fund for Acquisitions at The Grand Whisky Auction.

The rare find will become part of the Scottish Maritime Museum’s nationally recognized collection of maritime heritage which is housed in a former Victorian shipyard engine shed in Irvine, Ayrshire, and on the site of the world-famous William Denny Shipyard in Dumbarton.

The whisky, which is now believed to be undrinkable and which was one of 264,000 bottles stowed onboard the wartime cargo vessel, was recovered from the shipwreck by George Currie of Orkney in June 1987.  The North Sea diver and his work colleagues went looking for the wreck after completing a subsea cable repair between South Uist and Eriskay and the bottle was in his possession up until now.

Laden with goods to be sold to raise funds for the war effort, the 800 tonne SS Politician set sail from Liverpool on the 3rd February 1941. Bound for Kingston, Jamaica, and New Orleans, it was brimming with motor cars, bicycles, cotton, medicines, tobacco and around £145,000 in Jamaican bank notes.

It was, however, the fate of the contents of Hold Number 5, some 22,000 cases of the finest malt whisky from bonded warehouses in Leith and Glasgow, which inspired Compton Mackenzie’s famous 1947 novel Whisky Galore!

The lot acquired by the Scottish Maritime Museum also includes a diving helmet worn by the diver George Currie who recovered the whisky bottle, two bricks being carried as cargo on the ill-fated vessel and a poster from the 2016 remake of Whisky Galore! which featured Eddie Izzard, Gregor Fisher and James Cosmo.

“This bottle of shipwrecked whisky may be small in size but the colorful story behind it provides us with a powerful and enthralling link with our cultural and social maritime past,” said David Mann, Director of the Scottish Maritime Museum. “Intact and in good condition, which is amazing considering 46 years submerged in saltwater, the bottle complements our nationally recognized collection of Scottish shipbuilding, boatbuilding, engineering and design perfectly.”

The Wreck of the SS Politician

SS Politician set sail from Liverpool on the February 3, 1941, bound for Kingston, Jamaica, and New Orleans.

Although the original label on the bottle acquired by the Scottish Maritime Museum has been destroyed by submersion in seawater, the bottle production suggests that the contents originated from a distillery owned by W & A Gibley. Before 1941, W & A Gibley owned Glen Spey, Strathmill and Knockando. The company later went on to form the basis of International Distillers and Vintners which was eventually absorbed by Diageo.

Captain Beaconsfield Worthington set out to join a convoy of vessels heading to America but severe gale force winds soon forced him to change course. Just two days after leaving Liverpool, at 7.45am on 5th February 1941, SS Politician struck submerged sandbanks off Rosinish Point on the Isle of Eriskay and quickly began to flood.

With the crew rescued safely by islanders it wasn’t long before locals from Eriskay and across the Outer Hebridesdescended to the waters and set about night-time raids to ‘illegally’ plunder the freed, untaxed whisky under the noses of UK Customs and Excise Officers.

Islanders, suffering from war time rationing, believed that, because the vessel was grounded, the cargo was theirs to save under the ‘rules of salvage’. Over coming weeks and months bottles were plundered, concealed, drank and sold.

Local UK Customs and Excise Officer Charles McColl interpreted the laws quite differently. Estimating that the islanders had stolen 24,000 bottles of whisky, he and his team raided houses trying to catch them red-handed. Some were successfully tried for illegal salvaging, smuggling and black market selling of goods under the Customs Consolidation Act of 1876 or Merchant Shipping Act of 1984 and sentenced to up to six weeks in prison in Inverness and Peterhead. McColl finally put paid to any further salvaging by successfully applying for permission to scuttle the SS Politician’s hull.