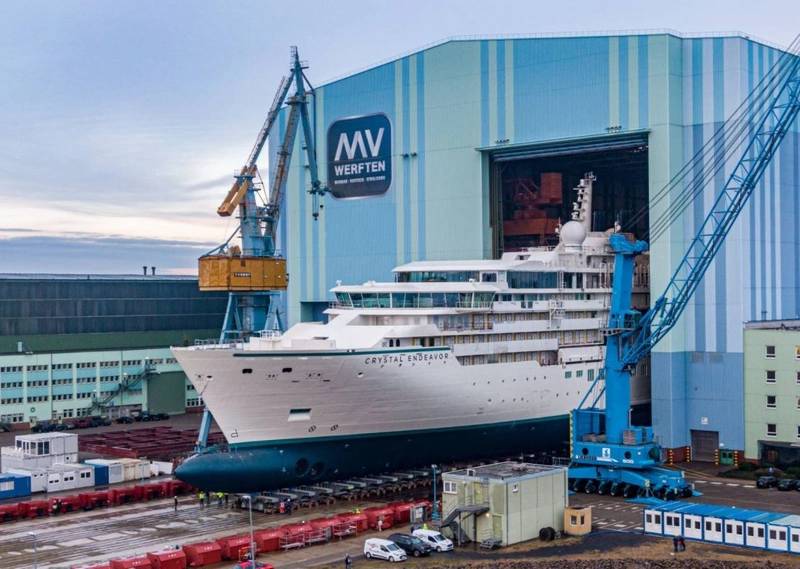 German shipbuilder MV Werften has said it has secured a 193 million euro loan from the German government to complete the new polar class luxury expedition ship Crystal Endeavor and to keep the shipyard in operation till March 2021.

As reported back in April, Genting’s Crystal Cruises announced the Crystal Endeavor’s launch would be delayed due to the temporary closure of the MV Werften shipyards during the COVID-19 pandemic.

The 164-meter, 20,000-gross-ton Crystal Endeavor was at the time berthed in MV Werften’s Stralsund yard for final outfitting and was due to enter service in August before the shipbuilder was hit by the pandemic outbreak, delaying the works on the ship and causing Crystal Endeavor’s scheduled itineraries to be delayed as well.

Commenting on the 193 million euro loan, MV Werften said Friday: “MV Werften and all its employees are very appreciative of the support of the State of Mecklenburg-Vorpommern and the Federal authorities in receiving this support.  All the funds from the loans will be used in Germany for MV Werftern´s shipyards.”

According to MV Werften,  Genting Hong Kong invested about 2 billion euros in the shipyards and the construction in progress of the Global Dream and Crystal Endeavor and had created about 3,000 direct jobs in the State plus thousands of indirect jobs in the cruise shipbuilding supply chain and the local economies of Wismar, Rostock, and Stralsund.

GHK ordered and took delivery of 22 cruise ships built in Germany, almost half of Germany’s output from 1996 for the cruise brands under its control, MV Werften said.

In 2016 GHK bought the yard group and named it MV Werften, to build ships for its three cruise brands as the order book from existing shipyards was full, and the earliest delivery was 7 years into the future. The keel for the Crystal Endeavor was laid in August 2018.

“GHK is an exemplary investor and fully relies on German management in the operations of Werften. We are very appreciative of the very significant investment, probably one of the largest made in Germany, and the creation of thousands of direct and indirect jobs for Germany and the EU,” says Peter Fetten, the Chief Executive Officer of MV Werften.

“It is the impact of the COVID-19 that stopped the world’s cruise fleet, including GHK, that MV Werften has to turn to the State and Federal Government for support under the WSF, which had been established by the German Government to assist industries impacted by COVID-19,” added Carsten Haake, the Chief Financial Officer of MV Werften. Since 2016, GHK had fully supported the shipyard and had not withdrawn any of the invested funds from Germany.”

MV Werften did not say when the Crystal Endeavor was expected to be launched.