Posted by tesla@jabvertising.com on June 7, 2022 | Featured 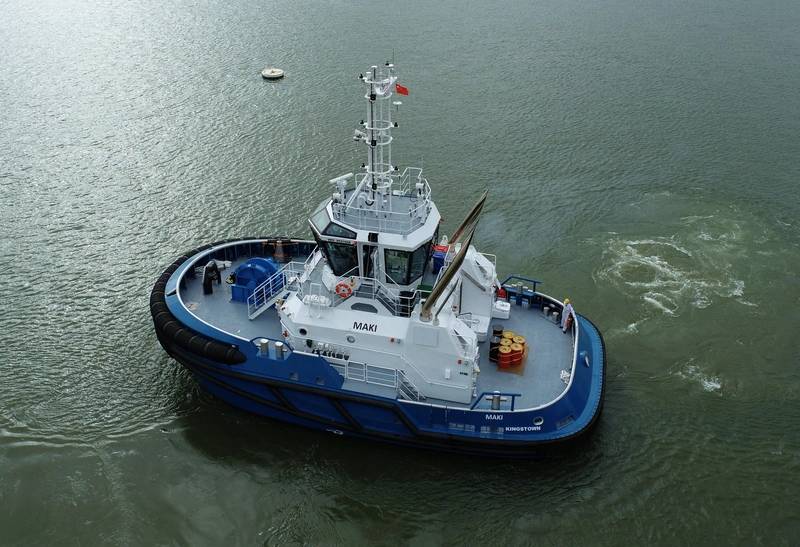 The Maki (orca) and Ika Nui (big fish) names were announced in the summer of 2021 after suggestions from the public. Eastland Group operates in Gisborne on the North Island, the easternmost commercial port in New Zealand. Nearly 3 million tonnes of logs pass through the port each year.

The harbor tugs are equipped with deck machinery including a bow winch from MacGregor. Ship-handling fenders at the bow consist of an upper row of cylindrical fenders and a lower course of W-fender. Sheer fendering consists of “D” rubbers and “W” block type fendering at the stern.

The accommodations have been outfitted to a high standard for an operating crew of five. The deckhouse contains an entrance lobby, the galley, mess, two officer cabins and a public WC. There is also a provision store and laundry in the lower deck. The wheelhouse is designed with a single split control station which provides maximum all-round visibility with exceptional visibility to the bow and side fendering, as well as operation on the aft deck. The engine room features an acoustically isolated switchboard room.

Records taken during sea trial show none of the crew cabins have noise level higher than 65 dB(A). This means the extremely quiet boat will provide comfortable working and living environment for its crew.