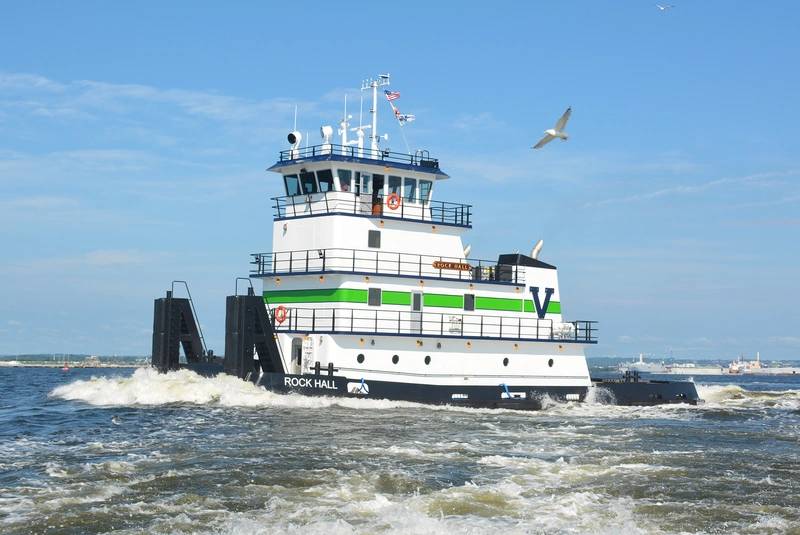 Jones Act marine transportation provider Vane Brothers announced it has taken delivery this month of the third in a series of four 3,000-horsepower push tugs. Named the Rock Hall, Vane’s newest addition is the nineteenth Maryland-built towing vessel to join the Baltimore-based company’s fleet since 2008.

Chesapeake Shipbuilding and Naval Architects of Salisbury, Maryland has delivered 16 3,000-horsepower, model bow tugs and three 3,000-horsepower square-bow push boats. Two of the Rock Hall’s sister tugs, the Salisbury and the Annapolis, were delivered in 2019 and 2020, respectively. The molded depth of these push tugs is only 10.5 feet, making them well suited for working in confined, shallow-draft areas along the U.S. East Coast’s inland waterways.

According to Vane Brothers President C. Duff Hughes, “Vane Brothers has once again taken delivery of a vessel constructed to the highest standards demanded by our customers. Powerful, practical and purpose-built to maximize maneuverability where it is needed most, the Rock Hall is another exciting addition to the Vane fleet.”

One more 3,000-horsepower Salisbury Class push boat, the Charles Hughes, is scheduled for delivery from Chesapeake Shipbuilding and Naval Architects later this year.

The tug Rock Hall is named for a waterfront town located on Maryland’s Eastern Shore. The town is known as “The Pearl of the Chesapeake.”