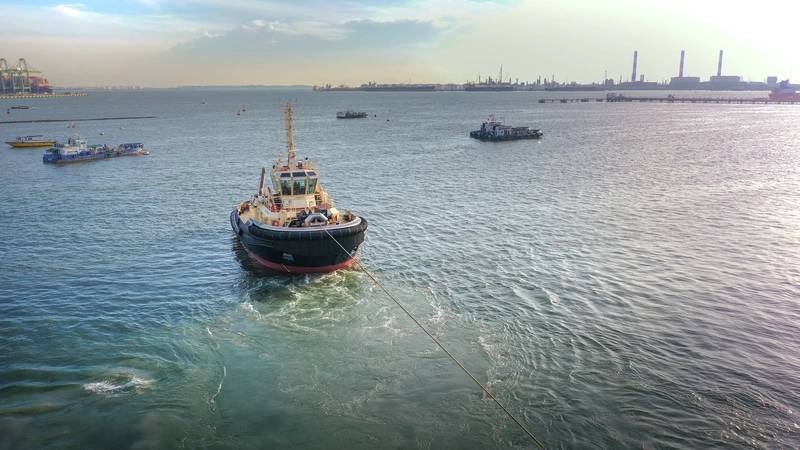 The vessel’s design was developed by Robert Allan Ltd. in close cooperation with Svitzer’s operations team, to meet the unique demands of the Port of Geraldton, Western Australia. With over 400 ship visits per year, the port’s primary cargo is iron ore, with over 10 MTPA exported. The port is located in a sensitive environmental area, requiring the tug to be at the forefront of safety and reliability, and to ensure the safety of all ships entering and leaving the port.

The 30-meter tug is diesel powered, fitted with twin azimuthing thrusters, and is designed for maximum efficiency and value in the performance of escort and ship handling duties of large tankers, bulk carriers, and container ships, the designer said. Main propulsion comprises of a pair of Caterpillar 3516C, IMO Tier II 2 certified diesel engines, each rated 2240 bkW at 1800 rpm, and driving a Schottel SRP 460FP Z-drive unit. The electrical plant consists of two identical Caterpillar C4.4 ship service generators, each with a power output of 86 ekW at 50Hz.

The vessel has been designed to the highest standards of outfitting for an operating crew of up to 10. The master and chief engineer’s cabins along with the galley and mess are located on the main deck. There are four double crew cabins on the lower accommodation deck, as well as a laundry room.

Ship-handling fenders at the bow consist of one tier of cylindrical fender at the forecastle deck level and W-block fenders below main deck level. The same type W fender is used at the stern and D-fender along the sheer lines of the main deck.

The tug has been outfitted for safe and efficient performance of ship handling and harbor towing. The deck machinery comprises an Ibercisa hydraulic double drum escort winch and two hydraulic vertical anchor windlasses on the bow. The escort winch is spooled with a high-performance soft line on each drum. In addition, a towing hook is provided on aft deck.

The tug is designed and constructed to satisfy all applicable Rules and Regulations of Lloyd’s Register of Shipping (LR) and the Australian NSCV for an escort tug with the following notation: LR ✠ 100 A1, Escort Tug, ✠ LMC, UMS, IWS, Unrestricted Navigation.