New Tug is a Mechanical Hybrid 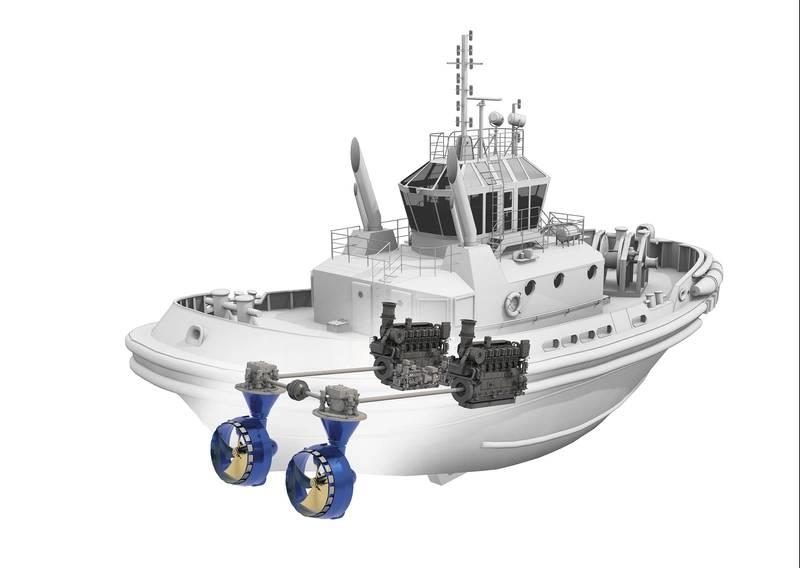 The concept of “hybrid tug” is getting a whole new definition with an innovative new tug under construction at Turkey’s Uzmar Shipyard for the Danish Port of Aarhus. From the outside it looks very similar to other Robert Allan Ltd-designed tugs built at the Uzmar yard. The RAmparts 3000 ASD tug, to be named Hermes is 30.25 by 11.75 meters.

In the engine room and in the thruster rooms of the azimuthing stern drive (ASD) tug, the innovations are revealed. A pair of Cummins QSK60 IMO stage II compliant engines, each send 2,700 horsepower (2013 kW) to the SCHOTTEL RudderPropellers type SRP 430 azimuthing thrusters. Most ASD tugs have the thrusters in a separate room, so also does the Uzmar tug, but an additional drive shaft links the port and starboard thruster units.

The remarkably simple innovation, designated SYDRIVE-M, allows one engine to be shut down, when the tug is not actually handling a ship, while the other engine provides adequate power to both thruster units. Since harbor tugs spend considerable time running at low load levels between docks, this can result in significant reduction in emissions, fuel costs and, over time, maintenance costs. With both Cummins engines powering the fixed-pitch, nozzled, 2.5-meter props on SCHOTTLE thrusters the tug will have a 12.5 knot free-running speed and a 65-ton bollard pull.

In another configuration, the power of the starboard engine can be dedicated to a large fire pump mounted to the front end of the engine. At the same time, the power of the port engine is committed to both of the azimuthing thrusters. This gives the operator full maneuvering control of the tug while holding it in the best position for firefighting. The harbor tug becomes a serious asset for combatting waterfront fires.

Emrah Sonmez, projects director of Uzmar, has said of the Hermes, “We can confidently say that this project will be a real revolution in the towage operations.”

Delivery is anticipated for the summer of 2021.