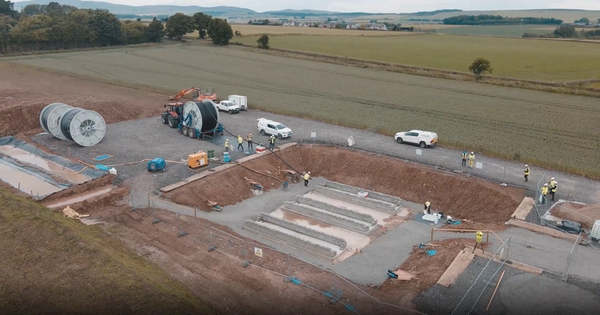 French power cable maker Nexans has won a contract for the supply of the onshore and offshore export cables for the 860MW Moray West offshore wind farm in the outer Moray Firth, Scotland.

Subject to the award of a Contract for Difference in 2022 and Financial Close, the wind farm will feature Nexans High Voltage Alternating Current (HVAC) cabling.

The wind turbines will connect to two offshore substation platforms (OSPs). Nexans’ 220kV cabling will be installed and buried from each OSP along the full route to the project-specific onshore substation.

The Moray West project is being developed by Ocean Winds. Ignitis Group has a minor shareholding. Ocean Winds is a 50-50 joint venture between EDP Renewables (EDPR) and ENGIE. According to the project operator, Moray West is expected to enter the next Contract for Difference (CfD) auction that the UK government has confirmed with be run in early 2022.

Commenting on the Nexans contract, Project Director for Moray West, Adam Morrison said: “The decision to select Nexans was made after an extensive procurement process. Nexans has a strong track record and we are delighted to work with them on the next Ocean Winds project, Moray West.  Nexans will deliver more world-class high voltage cable for Moray West to ensure the project can reliably export green electricity to consumers across the UK.

While Nexans have experience of utilizing local contractors, the Moray West project team is working with Nexans to maximize the potential for the regional supply chain to secure sub-contracts, primarily supporting the onshore construction, including through Meet the Buyer events.”

Ragnhild Katteland, EVP Subsea & Land Systems of Nexans commented: “Nexans is delighted to have secured this important, and our first, offshore wind farm project with Ocean Winds. This award re-confirms Nexans as a leading partner in the offshore renewable market and enables further support of our highly skilled onshore workforce based in Edinburgh working in close collaboration with local and nationwide contractors.
We look forward to supporting another critical Scottish offshore windfarm electrify the future towards the net-zero goal by 2045.”