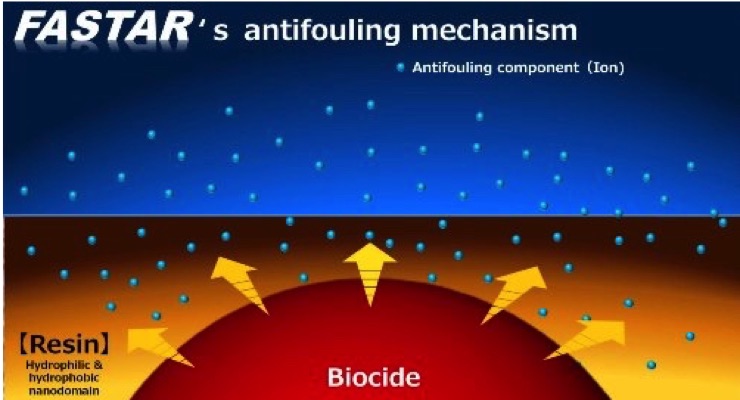 Nippon Paint Marine launched a new antifouling technology that the company said enhances antifouling performance to a level and consistency never seen before.

It also substantially improves the time and the film thickness required for application, compared to other hull coatings.

FASTAR is a self-polishing antifouling paint that incorporates a unique nano-domain resin structure designed to minimize the effect that seawater temperatures, vessel speeds and other external factors have on coating performance.

It is by precisely controlling the release of biocides that Nippon Paint Marine has been able to deliver a high-performing AF system with lower polishing rates.

Generally, antifouling performance becomes less reliable when its polishing rate is low. This is not the case with FASTAR.

The resin’s nano-domain structure which derives from the micro-domain structure used in Aquaterras – the world’s first biocide-free self-polishing hull coating – allows antifouling components to be accurately delivered and released in a much more precise, controlled and effective way.

“We set up a unit dedicated to developing new resins and finding ways of providing better antifouling performance. After several years, a lot of trial and error and a huge amount of lab testing, research has borne fruit with an entirely new type of SPC antifouling technology,” said Hirokazu Kaji, GM, Nippon Paint Marine, R&D. “In addition, thanks to the reduced film thickness, shipowners applying FASTAR will benefit from shortened in-dock application and drying times, resulting in further cost savings.”

FASTAR’s required total minimum drying time at drydock for a large container vessel, for instance, is reduced by a maximum of 37%, compared to the length of time needed for other typical coating systems, depending on the actual ambient temperature during application.

“FASTAR is an advanced self-polishing antifouling paint. Every aspect of its AF performance has been improved. No other paint maker has this technology. Its performance in both static and dynamic conditions is unrivaled,” said Makoto Nakagawa, marketing GM, Nippon Paint Marine.

While the cost benefits of the FASTAR system vary depending on vessel size and operational profile, typically less paint is required to protect a ship’s hull than existing SPCs.

Nippon Paint Marine says the optional addition of the hydro-gel will give FASTAR XI & XII the same 8% reduction in fuel consumption and CO2 as the company’s proven A-LF-Sea series, which has been applied to more than 3,300 vessels since market introduction.