Austrian oil and gas company OMV has completed the drilling of the wildcat well 1/3-13 in the North Sea, offshore Norway.

Using Maersk Drilling’s Maersk Integrator jack-up rig, OMV Norge, a subsidiary of OMV, drilled the well near the 1/3-11 (Ipswich) oil find, made in 2008, about 6 kilometers south of the Oselvar field in the Norwegian southern North Sea and 300 kilometers southwest of Stavanger.

The objective of the well was to prove petroleum in reservoir rocks in the Tor Formation from the Late Cretaceous Age.

Well 1/3-13 was drilled about 100 meters into water-bearing chalk in the Tor Formation, with good to very good porosity, but low permeability, the Norwegian Petroleum Directorate said this week.

The well also encountered a 3-meter thick petroleum-bearing layer in the Ekofisk Formation from the Palaeocene, which is probably residual oil.

The well-encountered oil in an 8-meter thick sandstone layer in the Forties Formation and a total of 3 meters of sandstone in the Andrew Formation, both from the Palaeocene Age. The oil/water contact was not proven.

The sandstones are of moderate to very good reservoir quality, the NPD said.

According to the Norwegian oil and gas industry regulator, more detailed studies will be required to determine the potential connection between the proven resources in the Forties and Andrew Formations in 1/3-13 and the 1/3-11 (Ipswich) oil discovery.

The well was not formation tested, but data acquisition has been carried out.

This is the first exploration well in production licence 970. The licence was awarded in APA2018.

The well 1/3-13 was drilled to a vertical depth of 3285 meters below sea level and was terminated in the upper part of the Tor Formation.

Water depth at the site is 71 meters. The well has been permanently plugged and abandoned.

The Maersk Integrator drilling rig will now move drill the development well 16/1-D-13 on the Ivar Aasen field in the North Sea, where Aker BP is the operator. 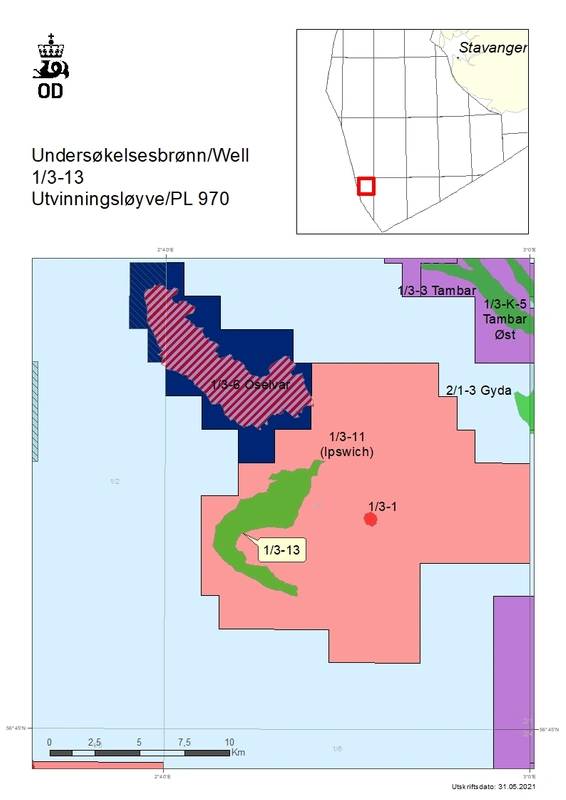