Corvus Energy, energy storage solutions provider for the offshore energy industry has been selected by National Oilwell Varco (NOV) to supply the Energy Storage System (ESS) to be used on an offshore drilling rig.

Corvus will deliver its ESS which will make part of National Oilwell Varco’s PowerBlade installation. PowerBlade is an energy storing unit developed by NOV that receives and provides energy based on operational needs onboard offshore drilling units.

According to Corvus’ explanation, PowerBlade is used in two ways to move towards a cleaner and more efficient future for offshore drilling: energy regeneration and peak shaving, each of which is explored below.

Operations involving frequent and cyclic hoisting of heavy loads require high levels of energy from power systems to lift the loads. Until now, drilling units have not typically been able to make use of the regenerated energy created when lowering a load, Corvus explained.

PowerBlade works by absorbing the braking energy emitted when a drill string is lowered, storing it in the ESS, and then reusing that energy for the next hoist of the drill string.

“With our first PowerBlade installation, we determined that an energy storage system can reduce power consumption by the drawworks onboard a rig by up to 80% in active heave compensation mode compared to traditional design.”

Per Corvus, the drilling drawworks places the heaviest burden on an offshore rig’s energy supply by causing a wide variation in energy consumption over large power peaks.

“Typically, six to eight large diesel generators account for the rig’s total energy supply. An energy storage system smooths the load, levels out the power peaks of the lifting system, and provides the generator system a uniform load, improving equipment performance, enabling the generators to run at optimal load, and reducing wear and tear.

“By enabling some of the generators to shut down and run the remaining in high load, the ESS increases fuel efficiency and reduces emissions. A generator set running on high load consumes approximately 15% less energy compared to two generator sets when producing an equivalent total power. PowerBlade enables the operator to rely on a higher, optimum sustained generator load,” explains NOV’s Øye. 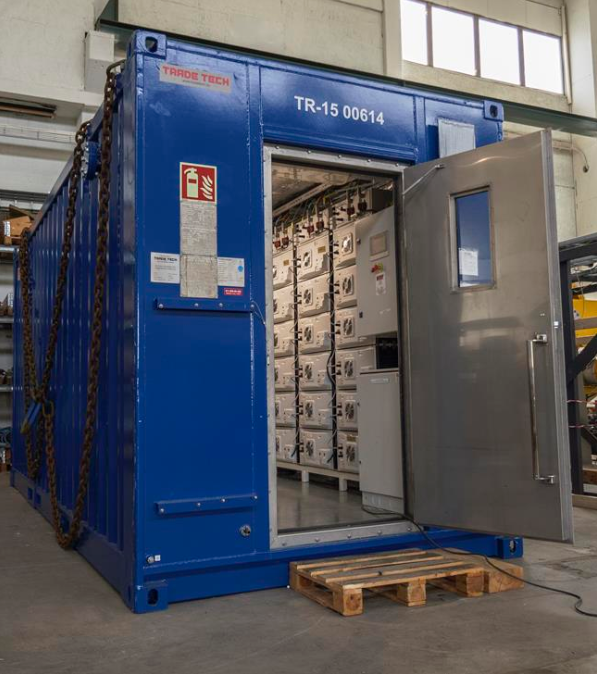 The fuel and emissions savings were shown in a study of the PowerBlade installation and other energy optimization projects onboard Odfjell Drilling’s drilling rig Deepsea Atlantic.

Estimated savings on this specific drilling rig for the entire project, including the PowerBlade installation, were 6.5 tonnes of diesel, 20 tonnes of CO2, and 300 kg of NOx per day compared to log data prior to the project.

“We are proud to support the oil and gas industry in their increasing commitment to investing in the green technologies that will help reduce the carbon footprint of their operations,” says Efraim Kanestrøm, VP Sales Oil, Gas & Renewables at Corvus Energy. “Corvus batteries combined with NOV’s flywheel technology gives a robust and efficient solution for reducing emissions and the cost of drilling rig topside operations.”

He continues: “In light of the impressive results of the first NOV installation on the Deepsea Atlantic, we expect a large increase in offshore drilling rigs using energy storage technology for energy optimization in the future.”