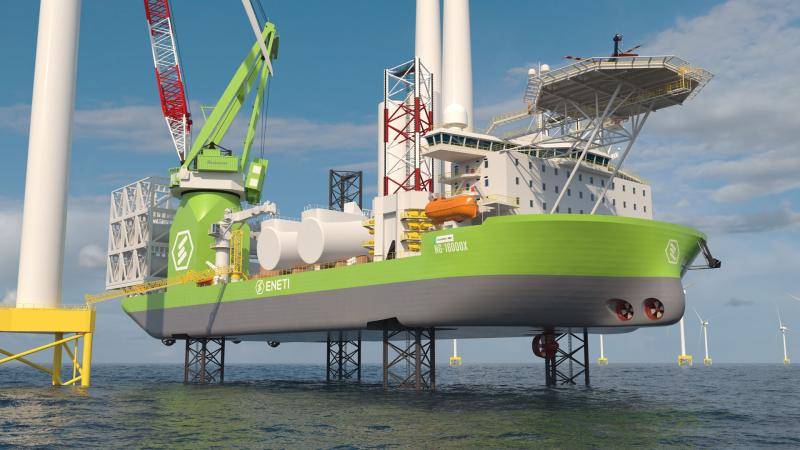 NOV announced it has been awarded contracts for the design and the supply of equipment for a wind turbine installation jack-up vessel (WTIV) being built for Eneti.

Scheduled delivery in Q3 2024, the self-propelled vessel will be a NG-16000X design engineered by NOV subsidiary GustoMSC to feature increased carrying capacity and lifting capacity, as well as a higher lifting height above the deck. The vessel is from the same series with the first U.S.-built NG-16000X and is ready to carry multiple 20MW turbines. The vessel has been designed with the option to adapt the vessel in the future, allowing it to operate on the alternate liquified natural gas (LNG) or ammonia fuels.

The GustoMSC NG-16000X includes the GustoMSC Rack & Pinion jacking system with a variable speed drive, which is integrated to offer high performance, reliability and safety for more than hundreds of jacking moves throughout the lifespan of the jack-up vessel, NOV said. The jacking system will have a regenerative power option were the generated power is fed back into the vessel system. The design further incorporates a 2,600-ton leg encircling crane, ready to install the future size monopile foundations and wind turbines.

Emanuele A. Lauro, Chairman and CEO of Eneti, said, “Since August 2020, we have been unequivocal about our intention to enter the wind turbine installation sector. This vessel will have the advanced lifting capabilities and energy efficiency that offshore wind developers require, not just today, but well into the next decade.

Jan-Mark Meeuwisse, Commercial Director, GustoMSC, said, “In a short period of time, both companies worked hard to have this unique NG-16000X ready for construction.

“The shortage of wind turbine installation jack-ups capable of installing heavier and higher turbines in deeper waters is foreseen. GustoMSC has invested and prepared for this change and is well positioned to support our client requirements,” Meeuwisse added.