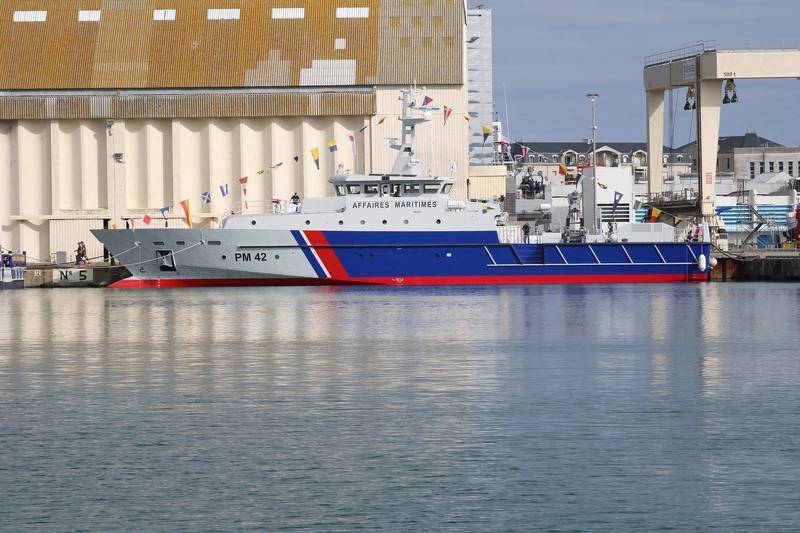 French shipbuilder OCEA has launched a new offshore patrol vessel for the French Maritime Affairs. The OCEA OPV 150 type aluminum vessel is now starting a phase of sea trials before its scheduled delivery at the beginning of 2022.

In December 2019, following a call for tenders, the French Maritime Affairs placed an order to OCEA for its new offshore patrol vessel, which will be based in Marseille. The Mediterranean patrol vessel Gyptis, 46.2 meters long and 8.5 meters wide, is a ship dedicated to State action at sea.

This new unit has two semi-rigid boats implemented by davit and can accommodate a drone aircraft to intervene at sea and carry out control, surveillance, identification and interception missions. In particular, the ship will be able to carry out missions such as fisheries and marine environment police, surveillance missions of the Exclusive Economic Zone, search and rescue missions, surveillance and control of ships at sea, sovereignty, diving operations, pollution control and protection of natural resources and the blue economy. The semi-rigid boats and davits, fitted with anti-tilting systems, will allow the ship to deploy and recover  control teams quickly and safely.

With excellent seakeeping behavior, benefiting from a significant noise reduction on board and having optimized interior spaces, the ship will provide real comfort at sea for the French Maritime Affairs crews, OCEA said.

The vessel’s main groups and engines are compliant with IMO Tier III regulations, and a hybrid propulsion system allows reduced speeds to operate only on electric motors, solar panels and LED lighting. Coupled with an OCEA-designed optimized aluminum hull and a diesel-electric propulsion mode, the OCEA vessel will consume approximately 50% less than a steel patrol boat of the same size.

A virtuous hull and equipment: OCEA-designed aluminum hull and superstructure to reduce the ship’s consumption and therefore CO2 and NOx emissions, 100% recyclable aluminum material, REPCET device for real-time tracking of cetaceans in order to limit the risk of collision.