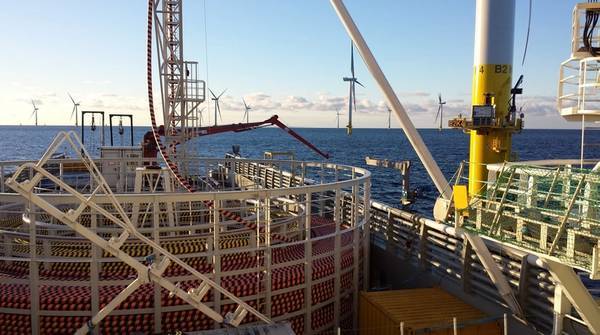 Oslo-listed offshore cable solutions provider Oceanteam said Friday that a client had returned one of its 4000-tonne carousels a year earlier than originally agreed.

“In February 2020, Oceanteam entered into a three-year agreement for rental of one of its 4000-tonne carousels. Parties to the agreement have agreed on a contract variation whereby the carousel has been returned approximately one year early,” Oceanteam said.

Hans Reinigert, CEO of Oceanteam, said: “In view of increasing activity in the renewables segment and oil & gas industry, we expect that, with the return of one of our larger carousels, we will be able to take advantage of higher rates observed in the subsea cable and umbilical markets.”

Oceanteam Solutions should thereby generate sufficient revenue to cover not only for the annual overhead costs of Solutions itself but also those of our investment platform. We are of the opinion this is a very realistic target and meeting the objective would lead to a cash-neutral result for the group in 2022.

Following substantial losses in recent years, the turnaround of the company, that initially comprised a debt to equity conversion and later on the divestment of shipping assets as well as various cost reductions, has been completed.

All in all, the turbulent years are behind us and we look at the future with optimism. We are currently exploring several M&A opportunities in line with our strategic outlook and firm aim to improve shareholder value. Further updates on this process will be provided in due course.”

In 2021, Oceanteam was in talks over a potential merger with Norway’s cable handling equipment provider Passer Group, however, the parties discontinued negotiations in October 2021.

Oceanteam, which last year sold its offshore construction vessels Bourbon Oceanteam 101 and the Southern Ocean, today describes itself as “an investment platform for marine and offshore assets with particular focus on the energy transition.”

Oceanteam Solutions is part of the Oceanteam group of companies and an independent offshore cable-services provider. It specializes in the provision of carousels, loading towers, tensioners, and other ancillary equipment and cable handling crew,  within the marine cable industry.